It was great to have you all over last night. I also enjoyed the racing!

Thanks for the camera work Hammer!!!!

You're welcome Bill. Here's the video.

OH MAN, I totally spaced and forgot our number 1 rule in that heat you recorded; TOO BAD!!!!!

Odd Thursday on August first at TooBad Motorplex. We had ten racers in the mix, with four of them being under the age of eighteen. It was a fun night of racing, crashing, and a little nerfing. It was good to see Len and Sue Gillean back in the garage, as well as Greg "Greenman" Petrolati back with a controller in his hand! Gary "Goose" Gossett brought out a fast Slot.It GT40 for the GT Class, and loaned my granddaughter Cailin a Ninco Jaguar to race in the Classic Sports Car Class (thanks Goose!). Speaking of my granddaughter, she made her grandpa proud by completing six three minute heat races (in two different classes) with less than one de-slot per heat! The entire Flood family was in attendance and all of them raced well. Russell, Todd, and Thomas "The Chisel" duked it out and all finished within just a lap or two of each other. But at the end of the night it was Rico Locati with a clean sweep, winning both classes! ............HAMMER - We missed you !!!!!!

Here's the way it went:

Greenman back in action! 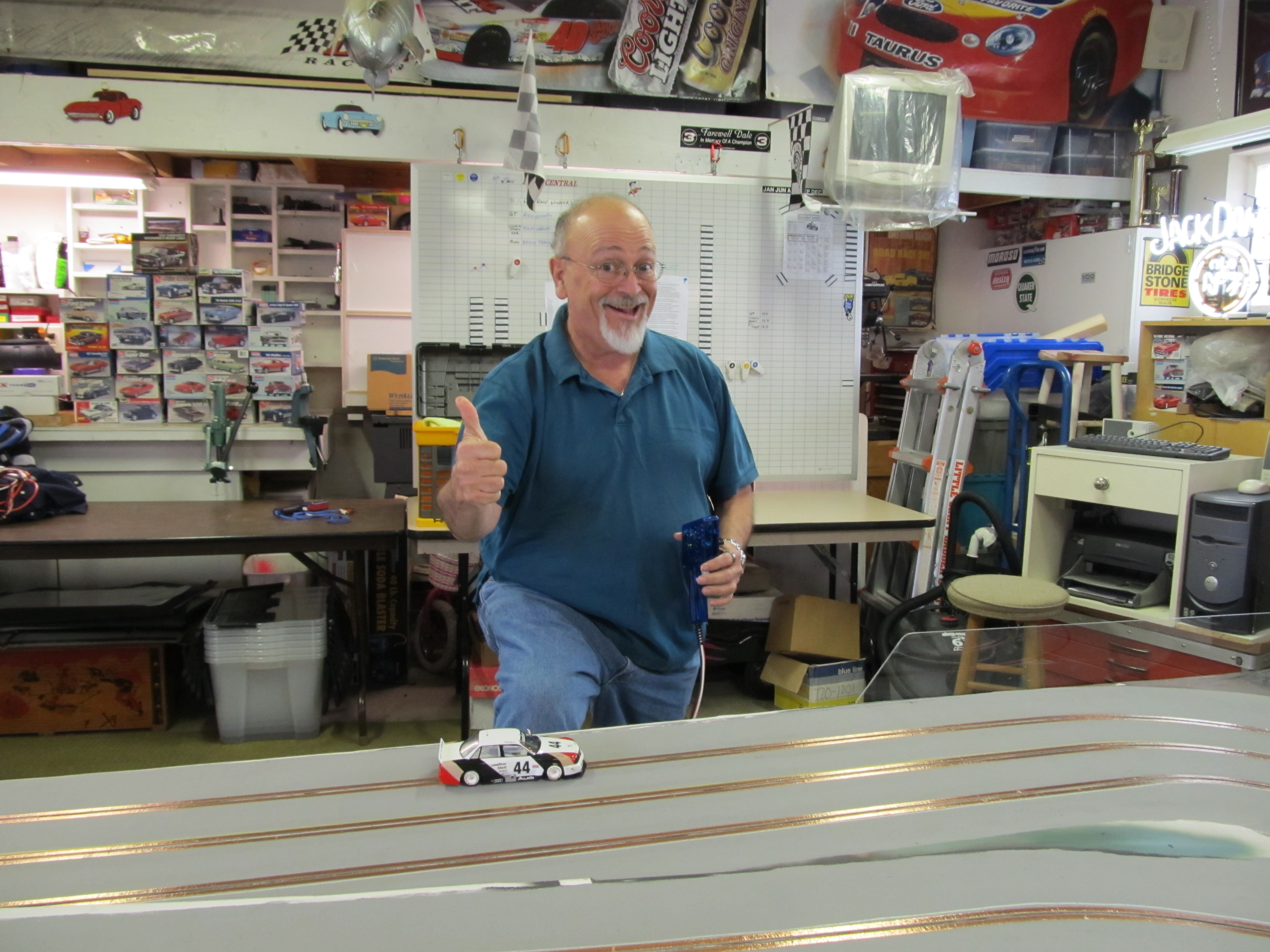 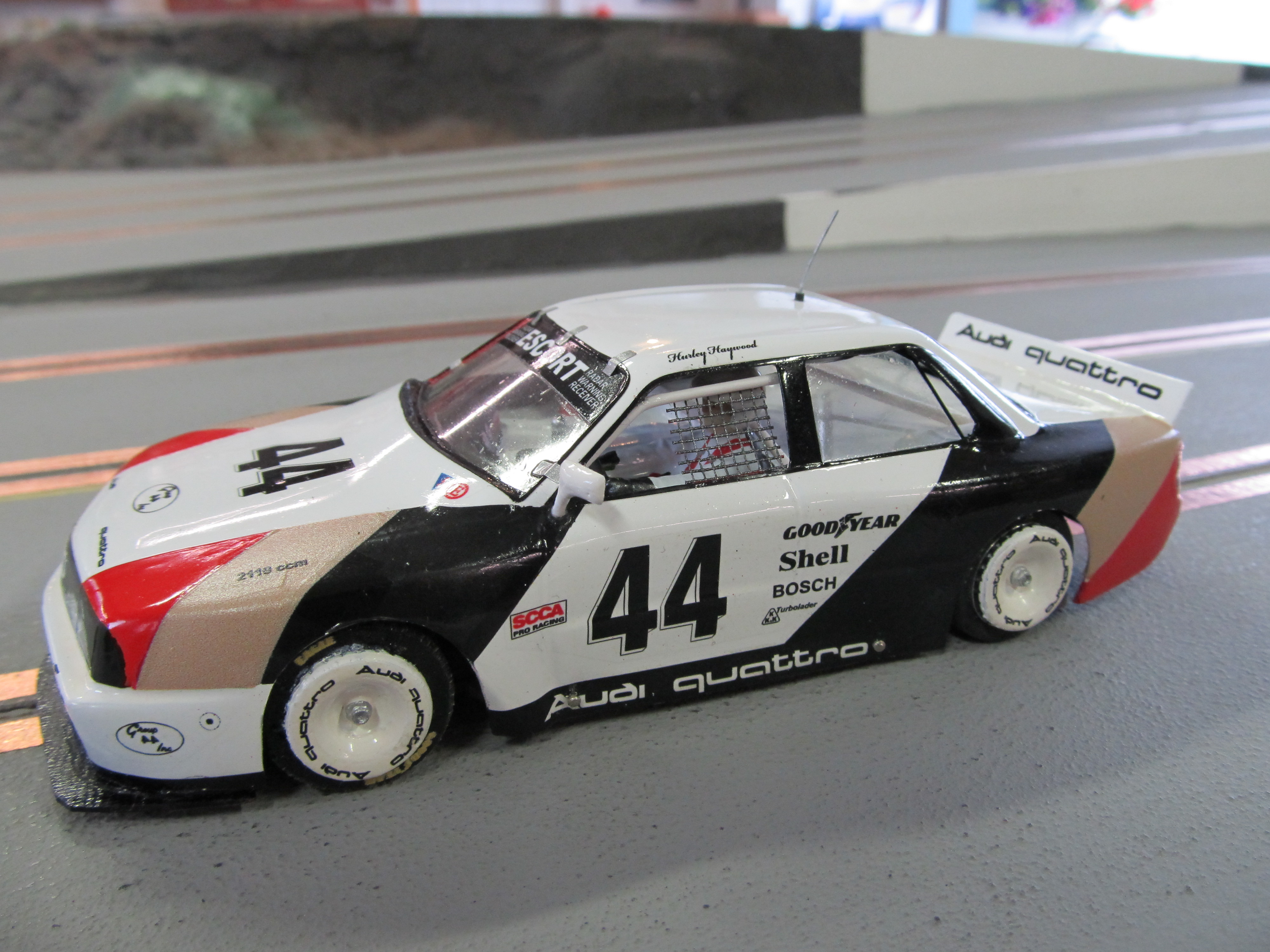 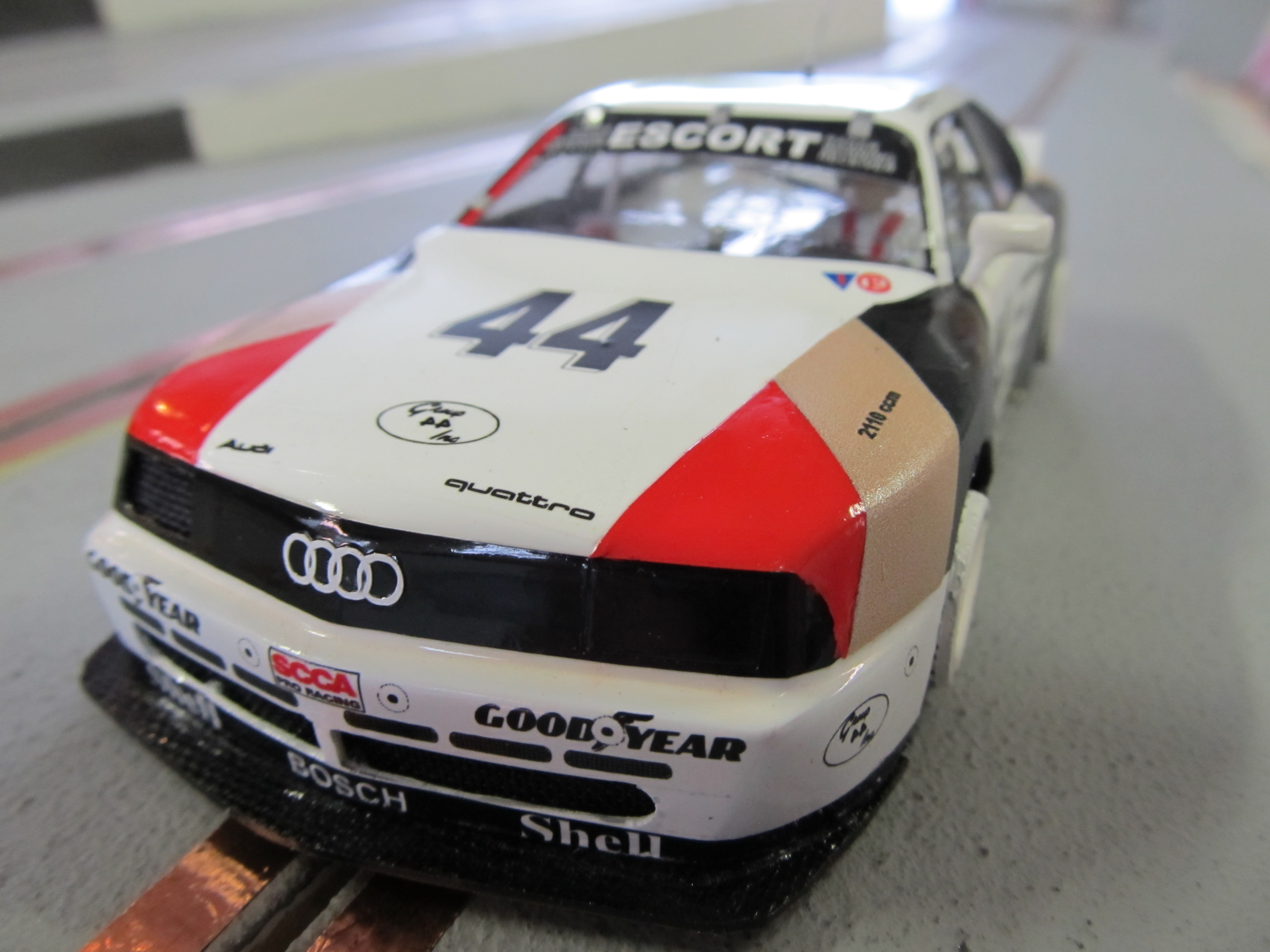 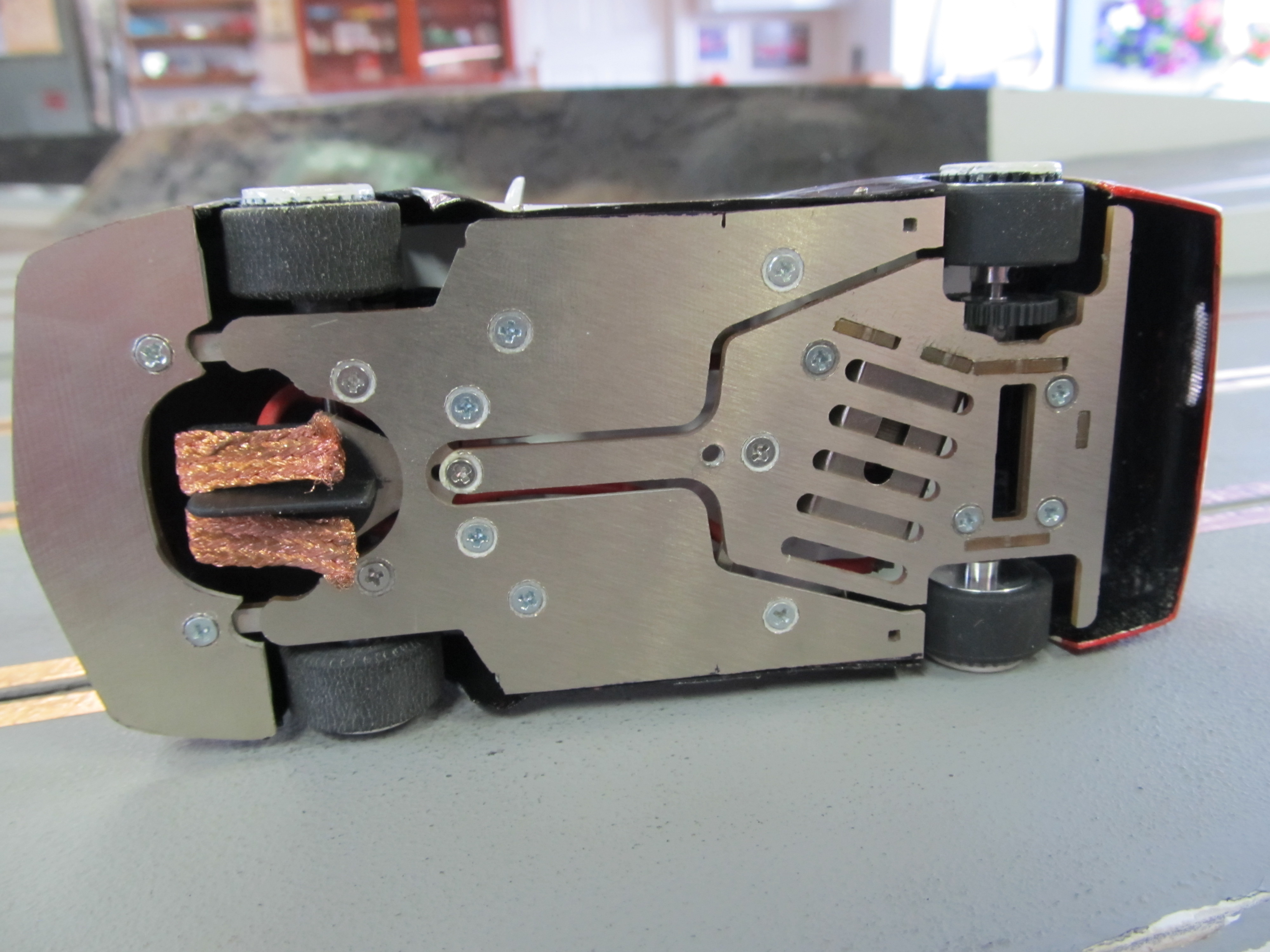 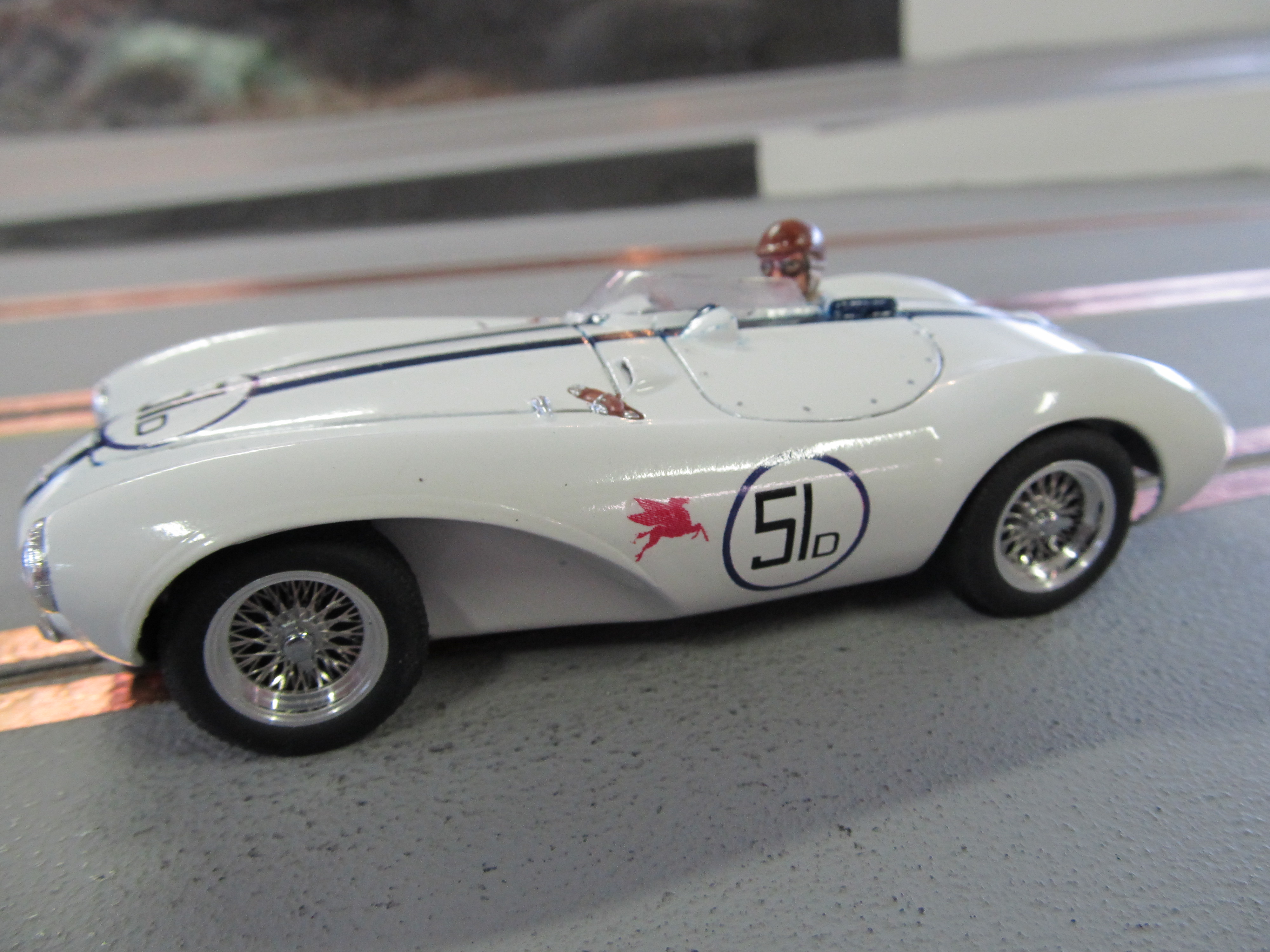 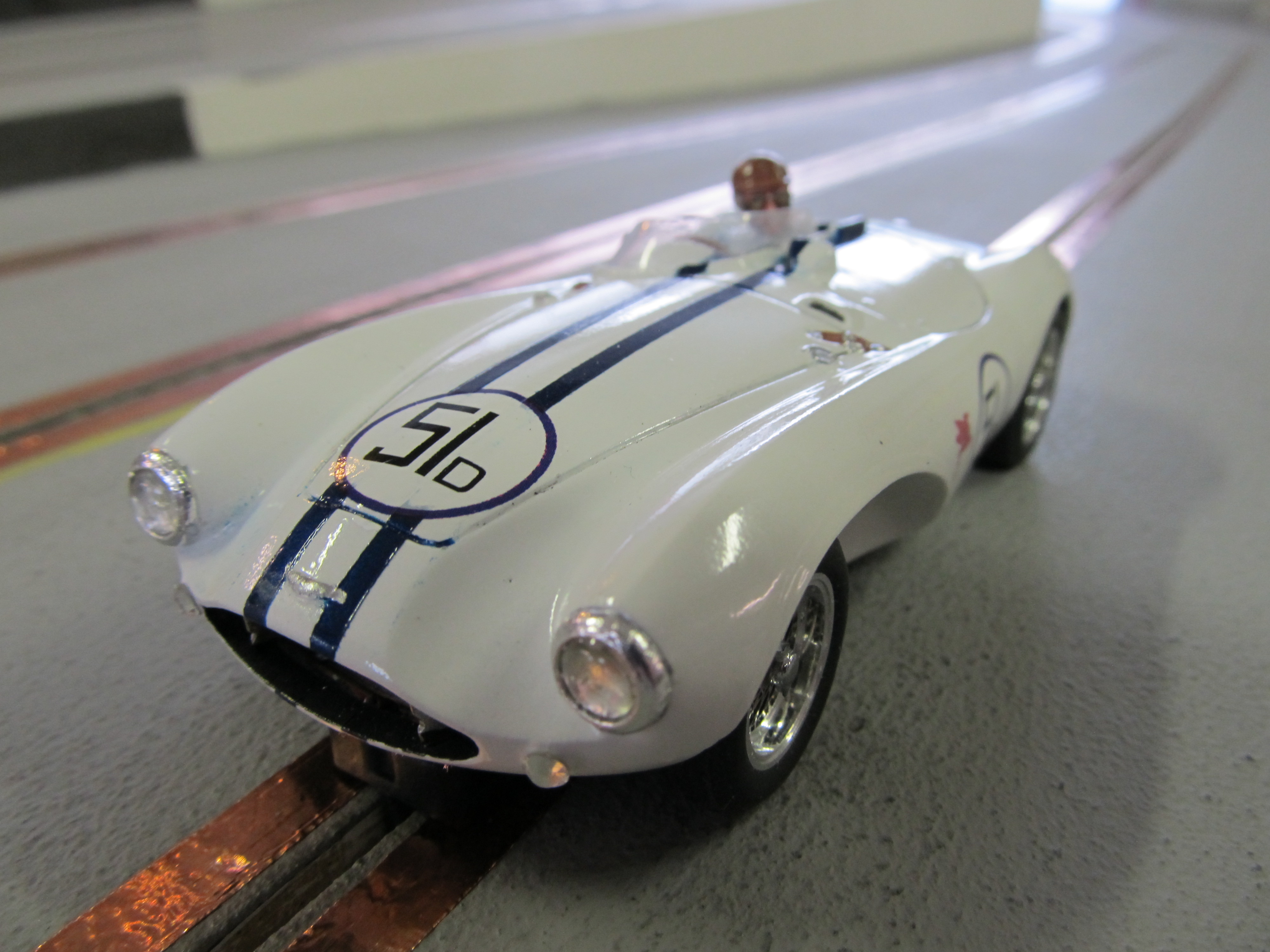 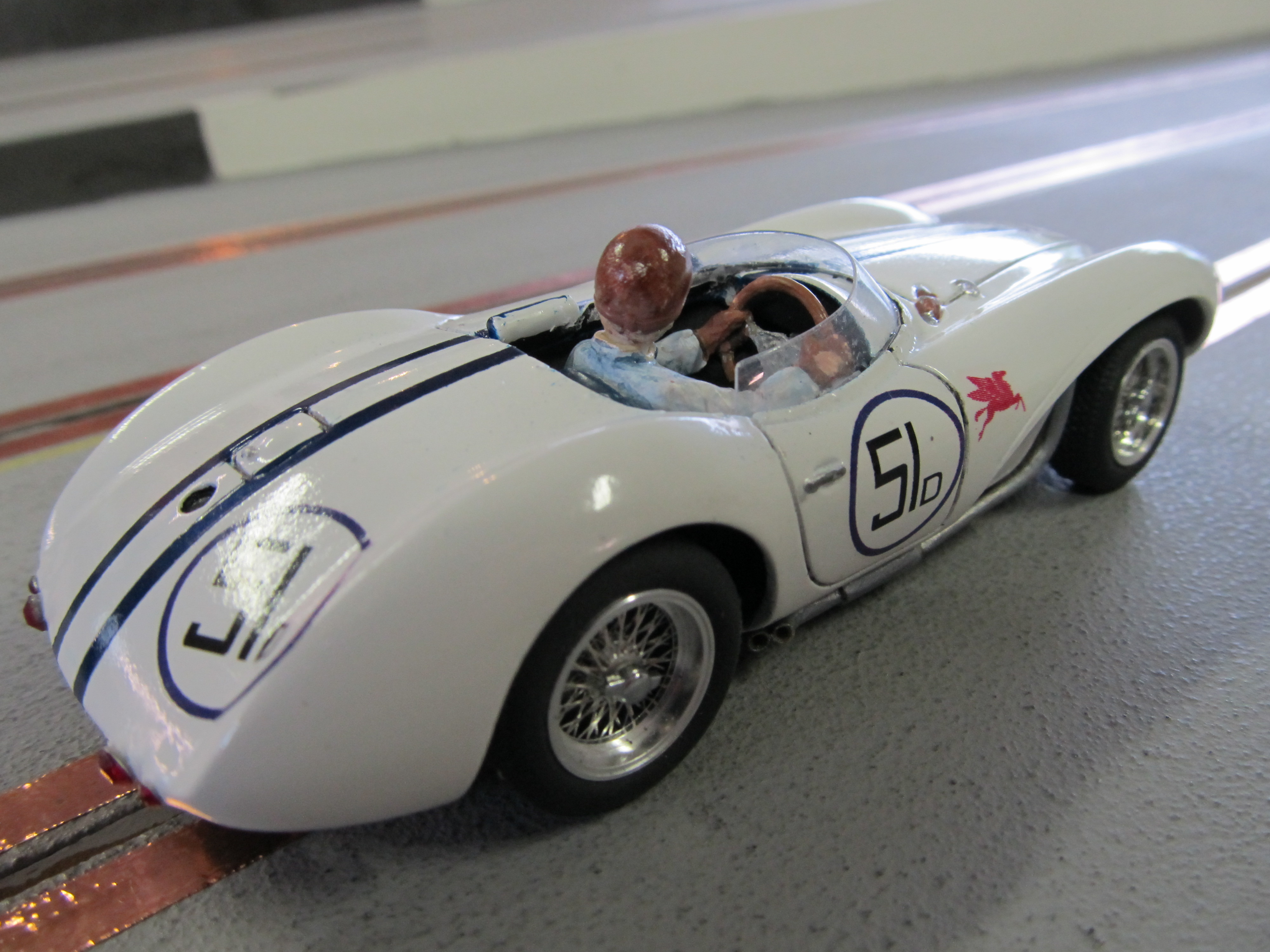 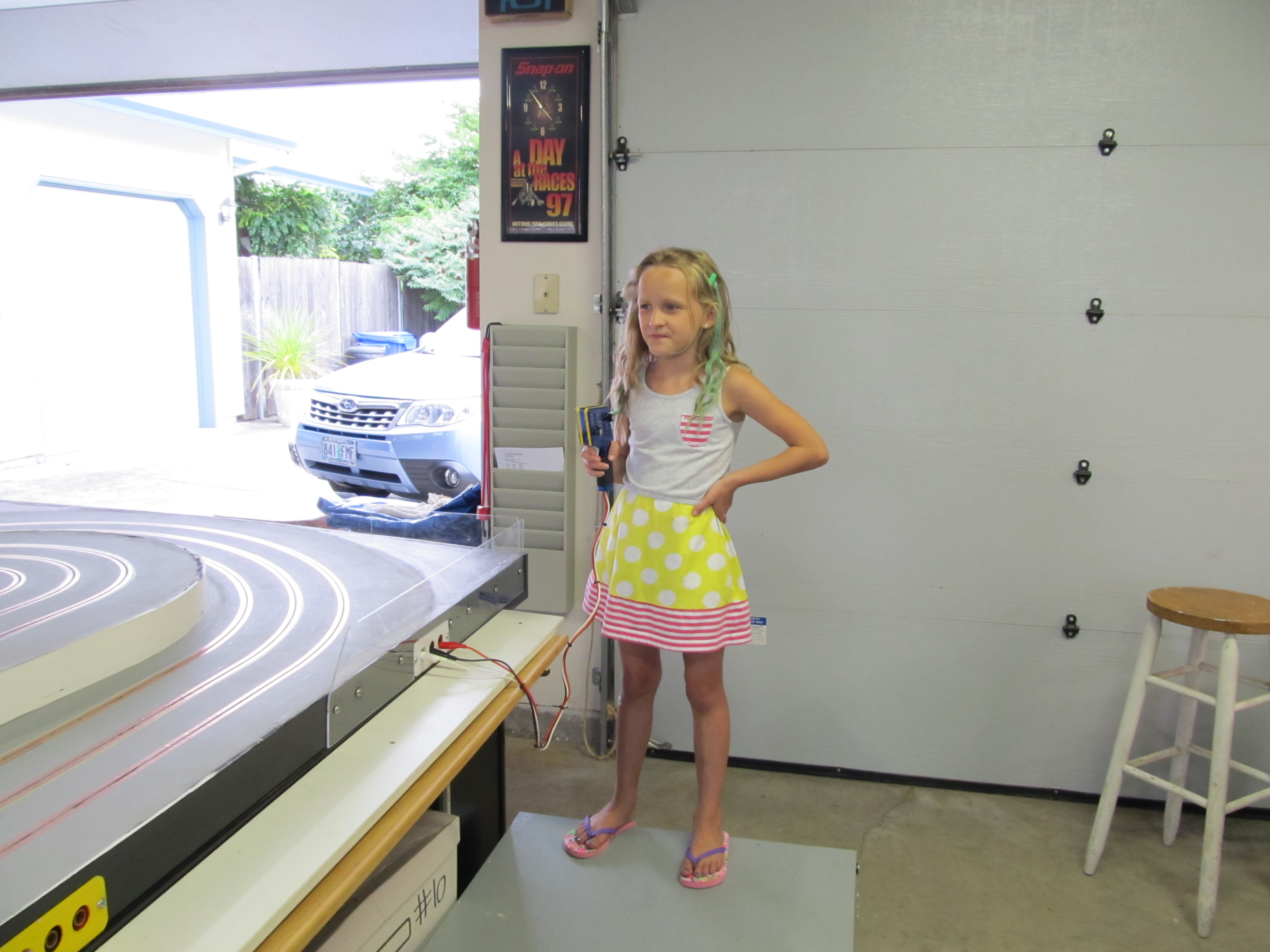 My friends Len & Sue Gillean with my beautiful wife Diane 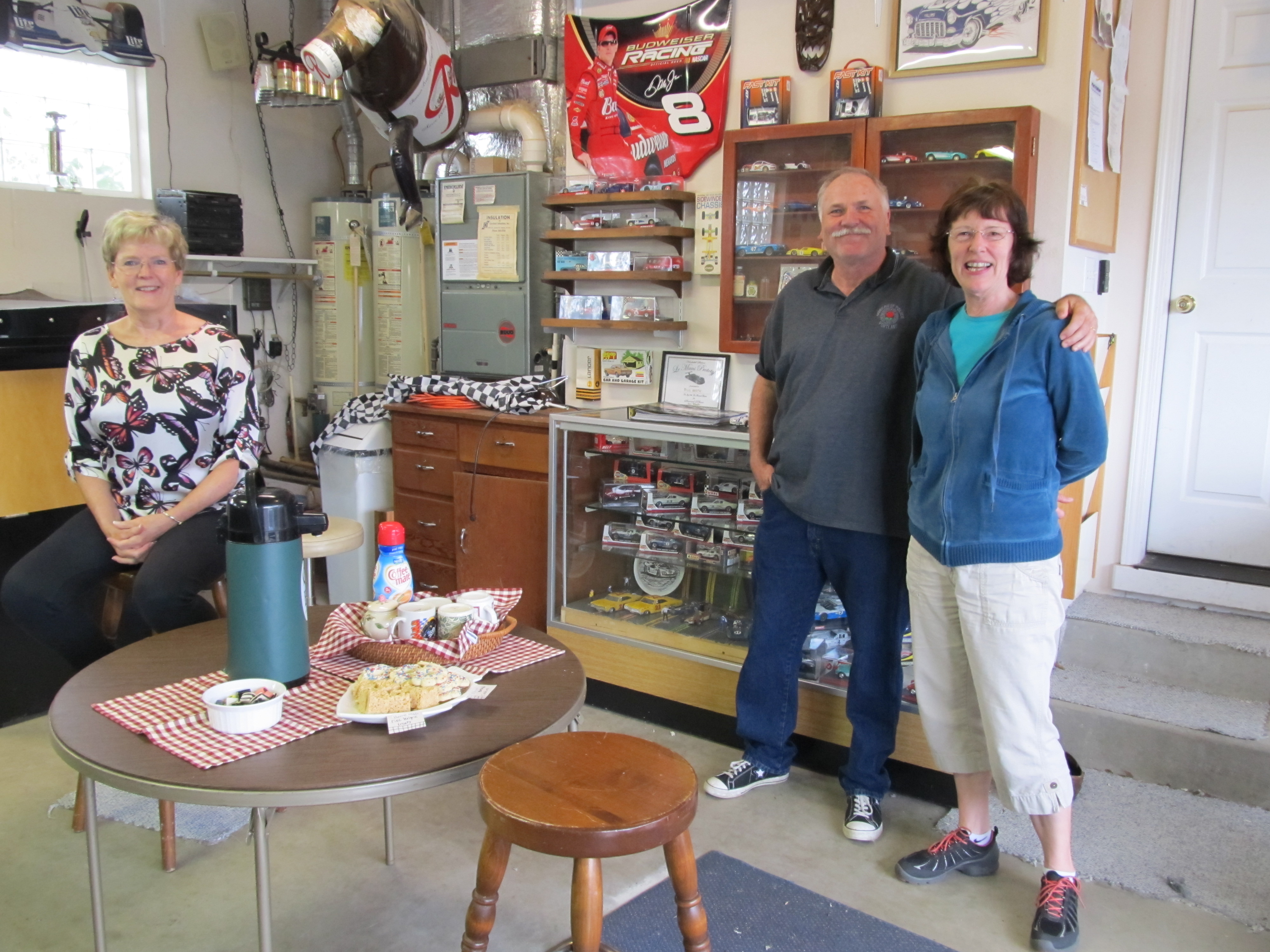 Thanks for hosting last night Bill and thanks to Diane for the brownies et all.  I think I had a sugar hang over this morning.

I have a question regarding my newly earned handicap.  Is it only if I use that car or is it any car?

You're welcome Rico, thanks for making it over!

Your handicap only applies to that particular car in it's winning configuration. If you de-tune or make significant changes to the car the handicap would not apply.  Only proven dominant car & driver combinations are assessed a handicap.

You can be proud you have achieved the handicap status!  You are in an elite group!

Odd Thursday Night Racing on August 15th. We had 9 racers for the Classic Sports Car Class. Rico took the win with Bryan Dickerson in second place. Rico raced his scratchbuilt Ferrari 250P and at the end Bryan was within 5 feet of Rico with his Ninco Corvette. In the GT Class Gary "Goose" Gossett got the win with his Slot.It Nissan R90. The margin of victory was very slim in this race also, as Goose edged out Rico with a mere 6 feet to spare. We saw some great close racing throughout the evening. Thanks to all that made it out!

"Greenman" (Greg Petrolati) made it out to race. Here's some of his work. 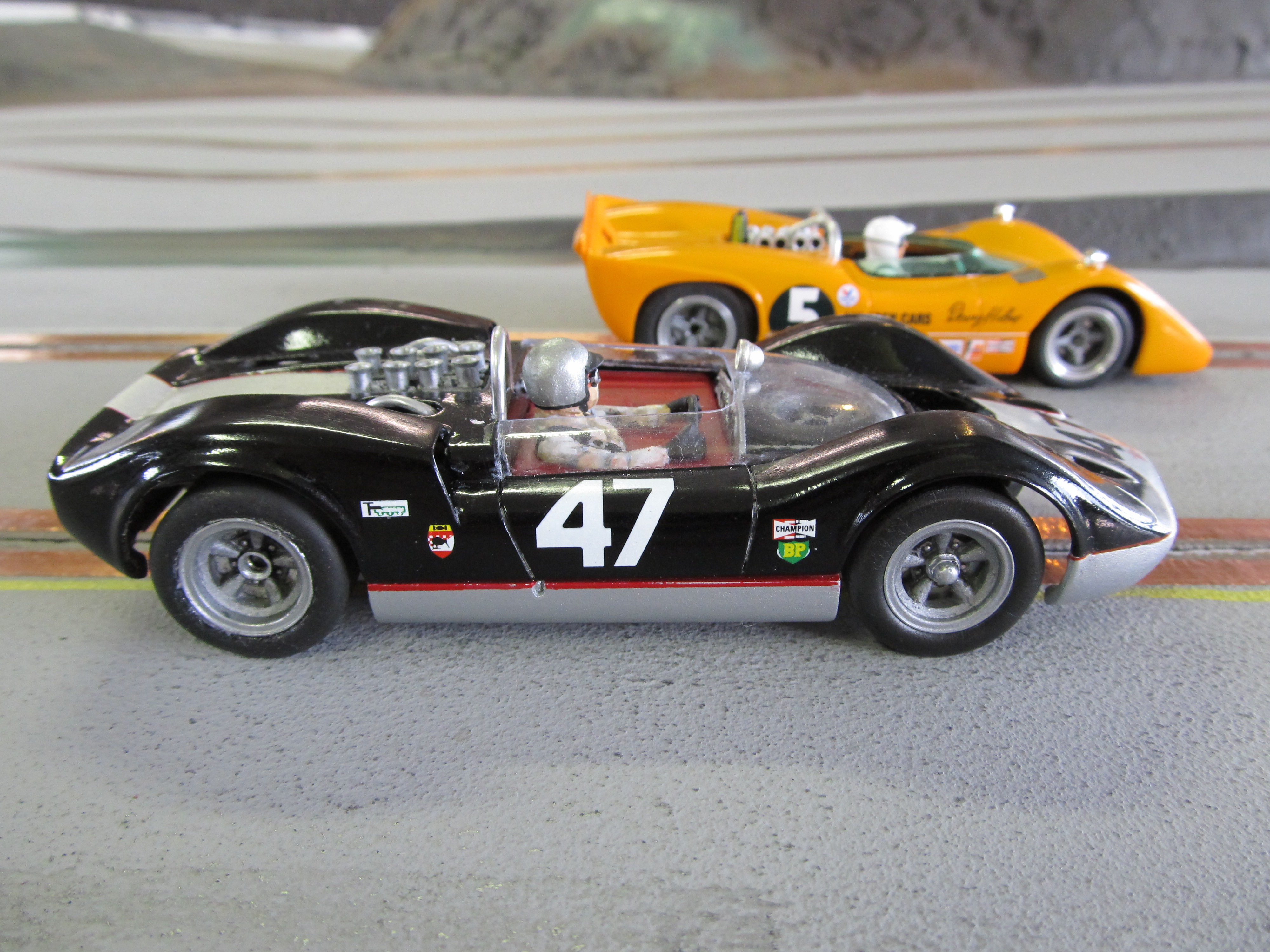 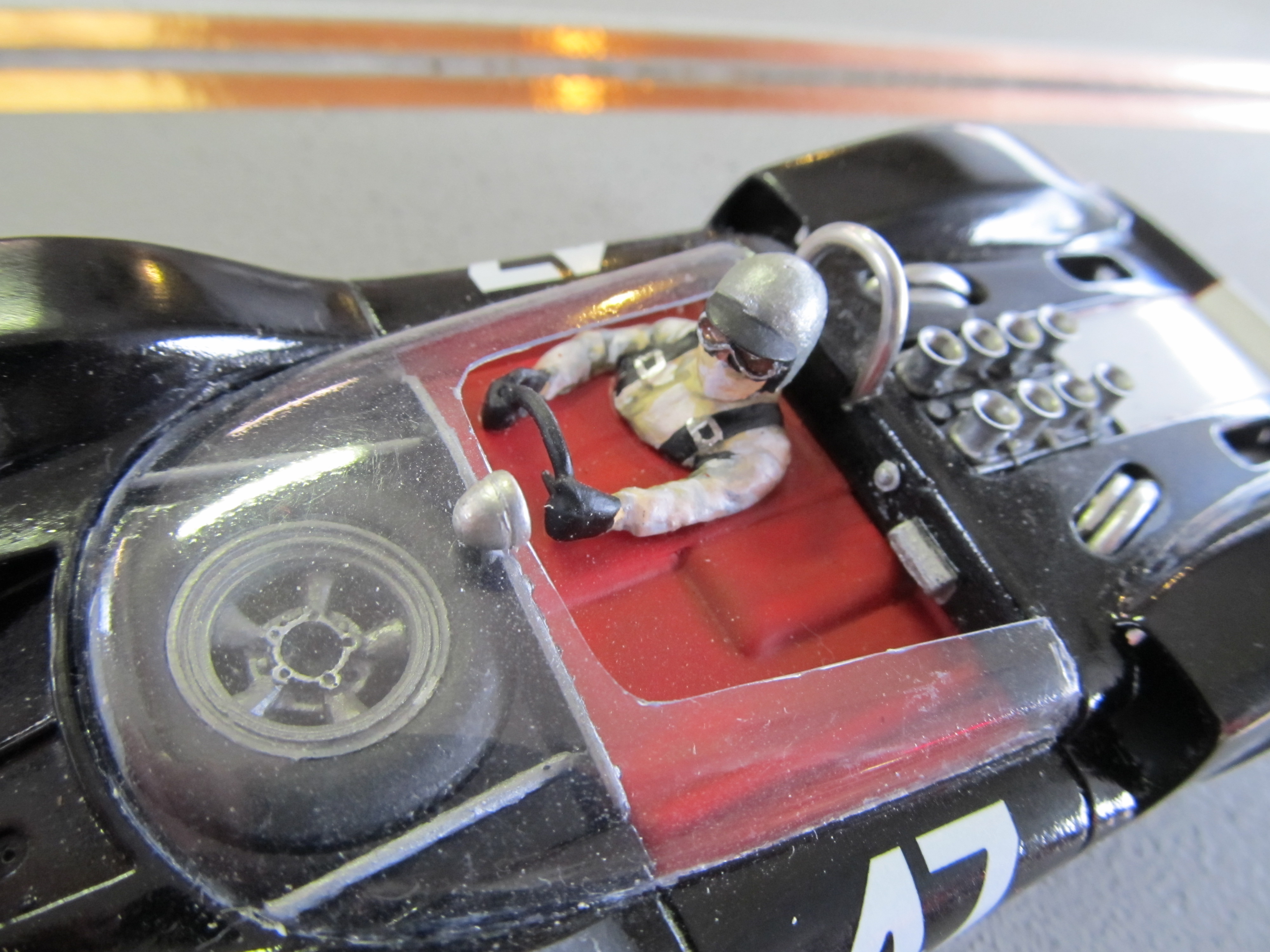 Greg rebuilt this Revell McLaren lowering the body on the chassis, installing aluminum wheels with inserts, and replacing most of the running gear. This is one good handling Revell McLaren! 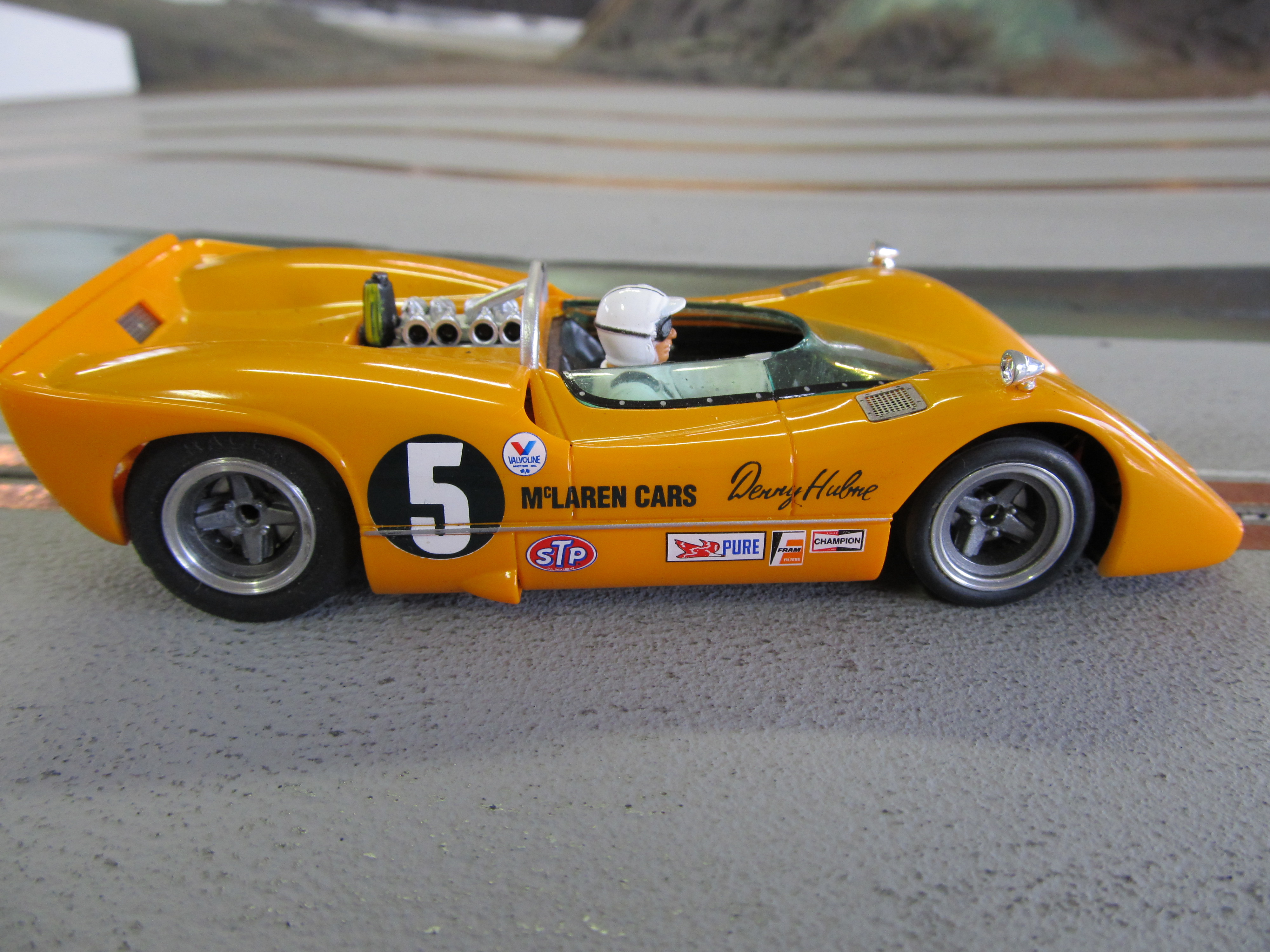 This scratchbuilt Jag started life as one of Revell's E-Type offerings. 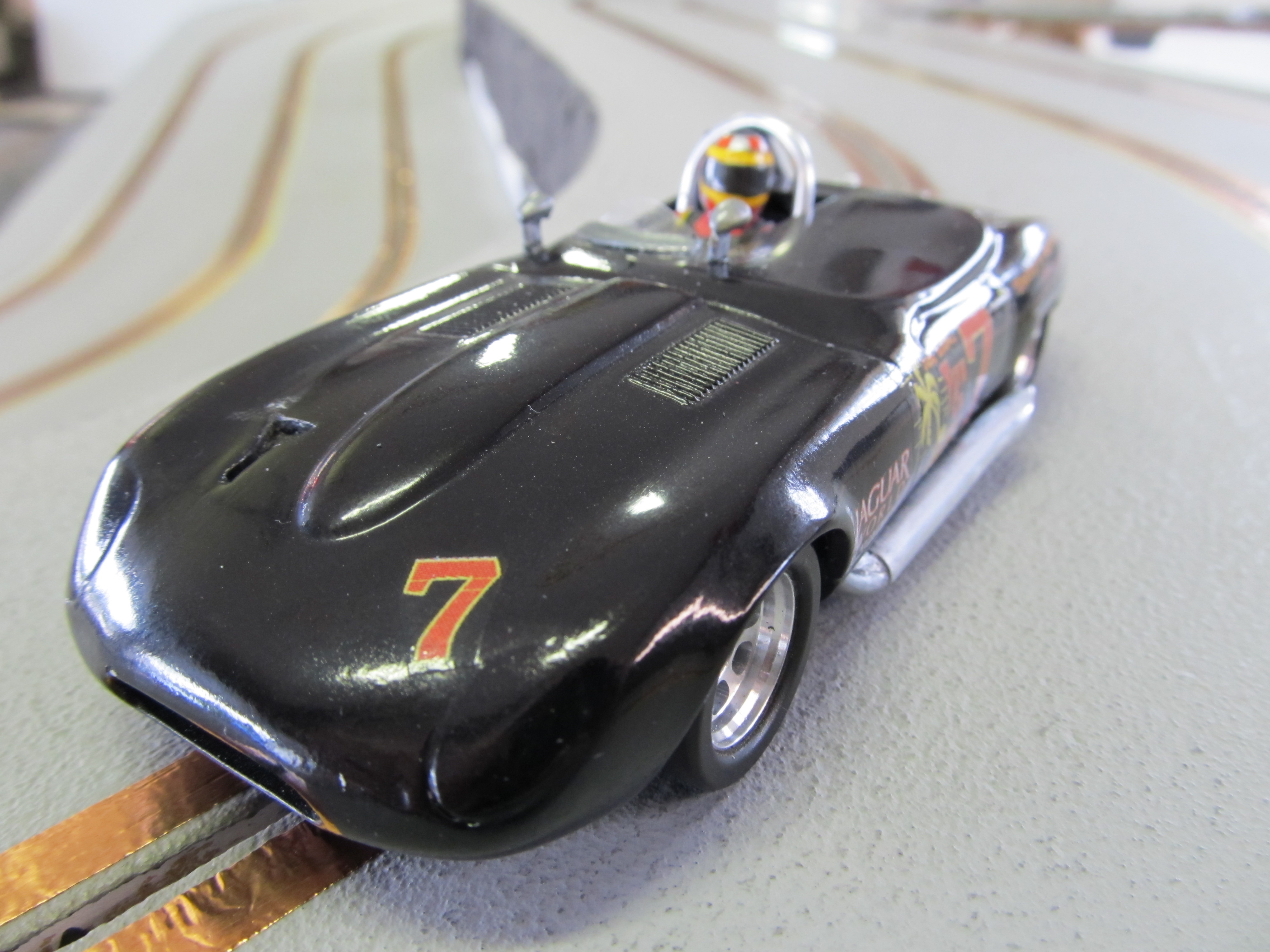 Odd Thursday on August 29th. 13 racers made it out to Fairview despite the extreme evening humidity. We first raced the Classic Sports Car Class where Greg "Greenman" Petrolati posted the win. In the GT Class Gary "Goose" Gossett killed the field with his Mr. Slotcar Mazda (no more magnet cars for you Goose!). After we had finished abusing the sports cars and GT's, Chris Kouba brought out his 1/24 scale BRM Porsche 962's for a little IROC action. Rico Locati won that race edging out "Goose" by 3/4 of a lap. All in all it was great fun last night! Thank you all for making it out!

Thanks for hosting another fun night.  We had a great time.

Thanks for a fun night of racing even though I arrived late I still had a great time!

Wet, windy, and cooler tonight for a change. Eleven racers made it out for some laps. My Granddaughter Cailin was visiting, so I reversed the order of the classes from how we usually race so she could race in the GT Class (Papa Track Owner Executive Privilege Rule - established 9/5/2013). Chris Kouba supplied a field of 1/24 BRM Porsches for an IROC race to close out the evening. However the race was cut short because we brutally abused the cars and broke the guide flags on two of them. We apologize Chris! Thank you for your patience and understanding, not to mention your generosity!

All in all another fun night of racing! Thank you to all that came out!

Here are the results:

Races were scheduled on dates Beaverton Slot Car Club was not holding races.

In February 2013 the change was made to NASTE Odd Thursday Night Racing, with TooBad Motorplex as the host track.

The goal for NASTE Odd Thursday Night racers is to make the Official Winner's List.

Sept. 19, 2013 Odd Thursday Night Racing. A nice evening with six racers in attendance made for some fun low key racing. The Classic Sports Car field consisted of three Ninco Corvettes, an MRRC Cheetah, and one Ninco Porsche 550. It was a very close race with first and second place finishing nose to tail (less than a car length). The GT CLass cars were very fast with the winner posting 58 total laps. The field was made up of three Slot.It cars, a Scaleauto Toyota, and two Ninco Moslers. We also had time to get in some quality bench racing, Scrabble time (although technically it was Upwords...), and general B.S'in. It was a very enjoyable evening! Thank you to all that made it out!

Thanks to Bill for another fun night.  I really enjoyed the donuts.  Perhaps too much!

We had seven entries in both classes. The Classic Sports Car Class entries consisted of one scratchbuilt car, two Ninco Corvettes, a Ninco Jaguar, and a Ninco AC Cobra, one Revell/Monogram King Cobra, and one MRRC Kellison. The racing was very close with four racers on the same lap less than ten feet apart. Gary "Goose" Gossett posted another win with his Ninco Corvette. The GT Class results were nearly as tight. Of particular interest was Beau Frazier's scratchbuilt Corvette which posted a third place finish, less than a full lap behind the leaders. Beau's brass chassis beauty utilizes NSR running gear. I expect this will not be Beau's last trip to the podium with this Vette! Monte Saager took first in the GT Class with his Scale Auto Toyota.

Here's a couple of photos of Beau Frazier's scratchbuilt Corvette. 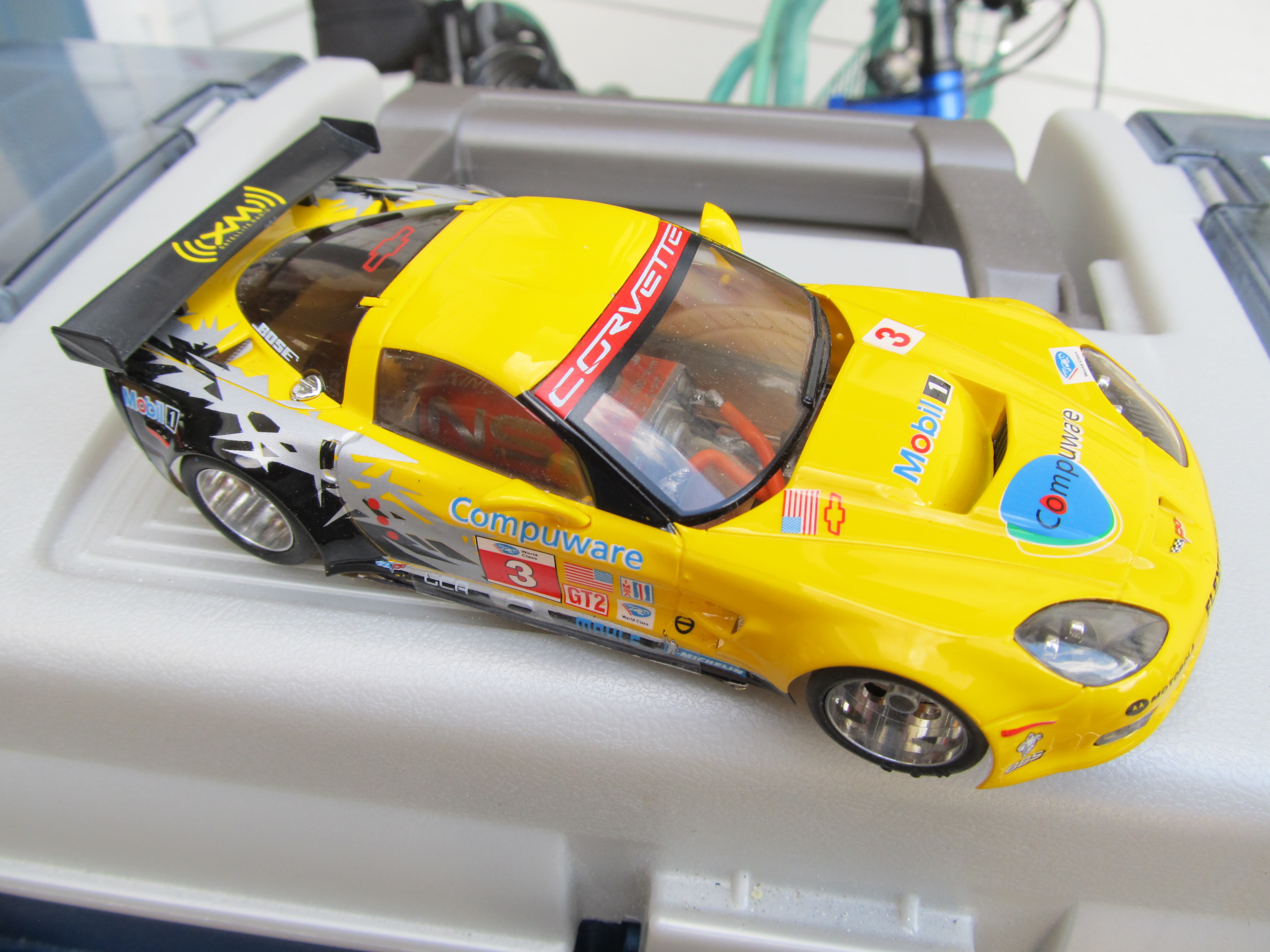 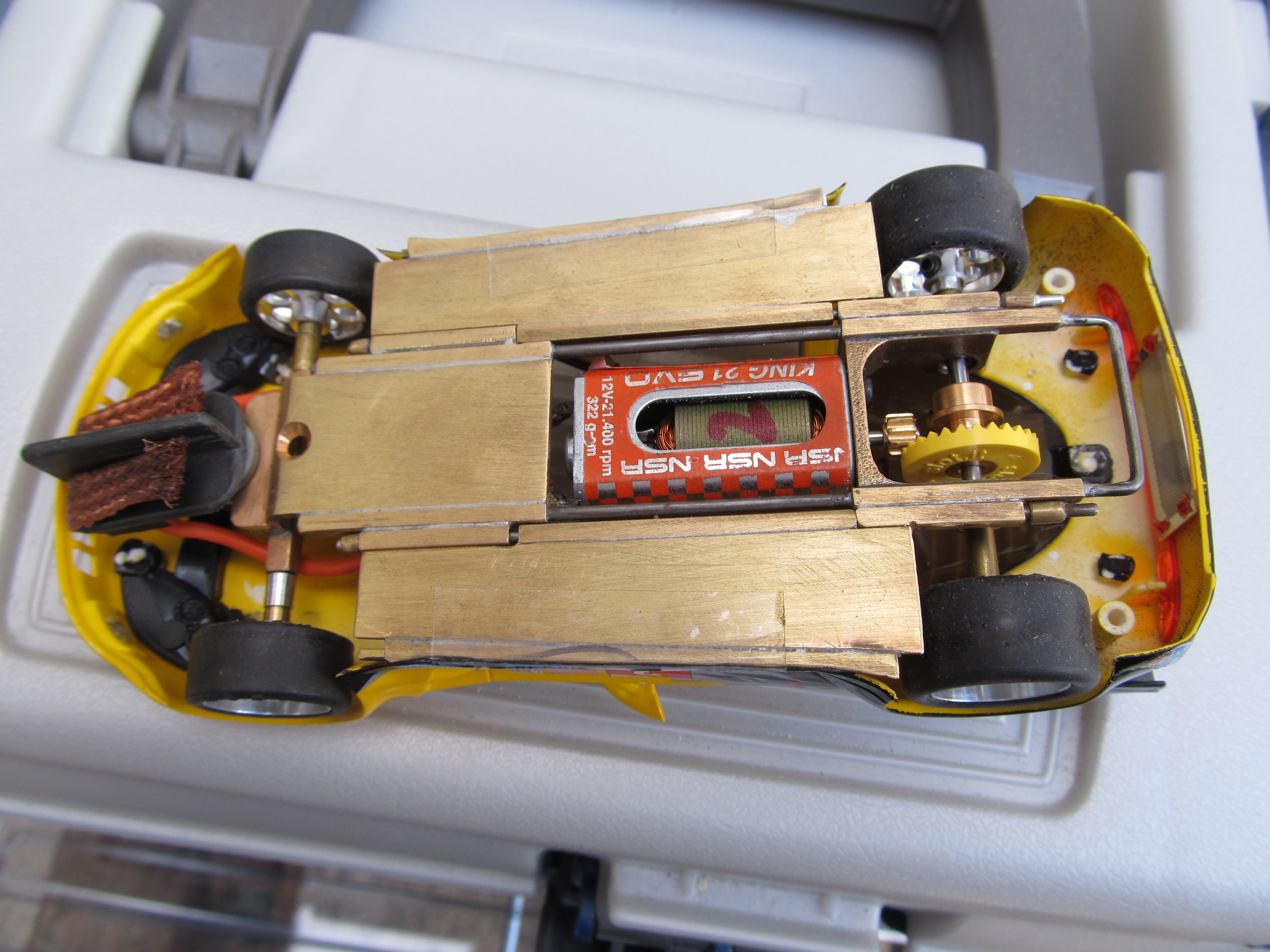 Supre car and a great runner.

Whoever ran for me in the GT class can run for me again!

You gotta claim that one buddy!!!!!

Odd Thursday evening, November 7, 2013. Six of us got together for a little racing, and a chance to forget about this crappy, wet, cold weather. We had the pleasure of having Mitch Brooks stop by to check out our Odd Thursday program. Mitch has been active in 1/24 scale drag racing. We raced the Classic Sports car Class first and it became obvious traction, or more appropriately the lack of it, was the big issue for the night. Terry Abbott got the win, beating out Goose by just one tenth of a lap. Mitch Brooks won the GT Class where traction was nowhere to be found. For the finale Chris Kouba brought out his 1/24 BRM Porsches for some IROC style racing. Racing these cars on the narrow (for 1/24 cars) and tight TooBad Motorplex track is exciting to say the least! We nerfed, traded paint, and just plain booted each other for hours! Racing thew BRMs is just way more fun than it should be! Thanks Chris for again letting us abuse your cars (especially me!).

Thanks to the racers that made it out!  I had a blast!

Nine racers tonight, we raced The Classic Sports Car Class, GT Class, and held the second round of the SCITCC Proxy. Chris Kouba brought out an entry for the Classic Sports Car Class that had everyone taking notice! Chris installed a set of narrow wire wheels and tires on his Slot.It Ford GT to make it legal for the class. From the way Chris' car performed, I'd have to say this is a great set up for the class. I may have to try this set up myself! 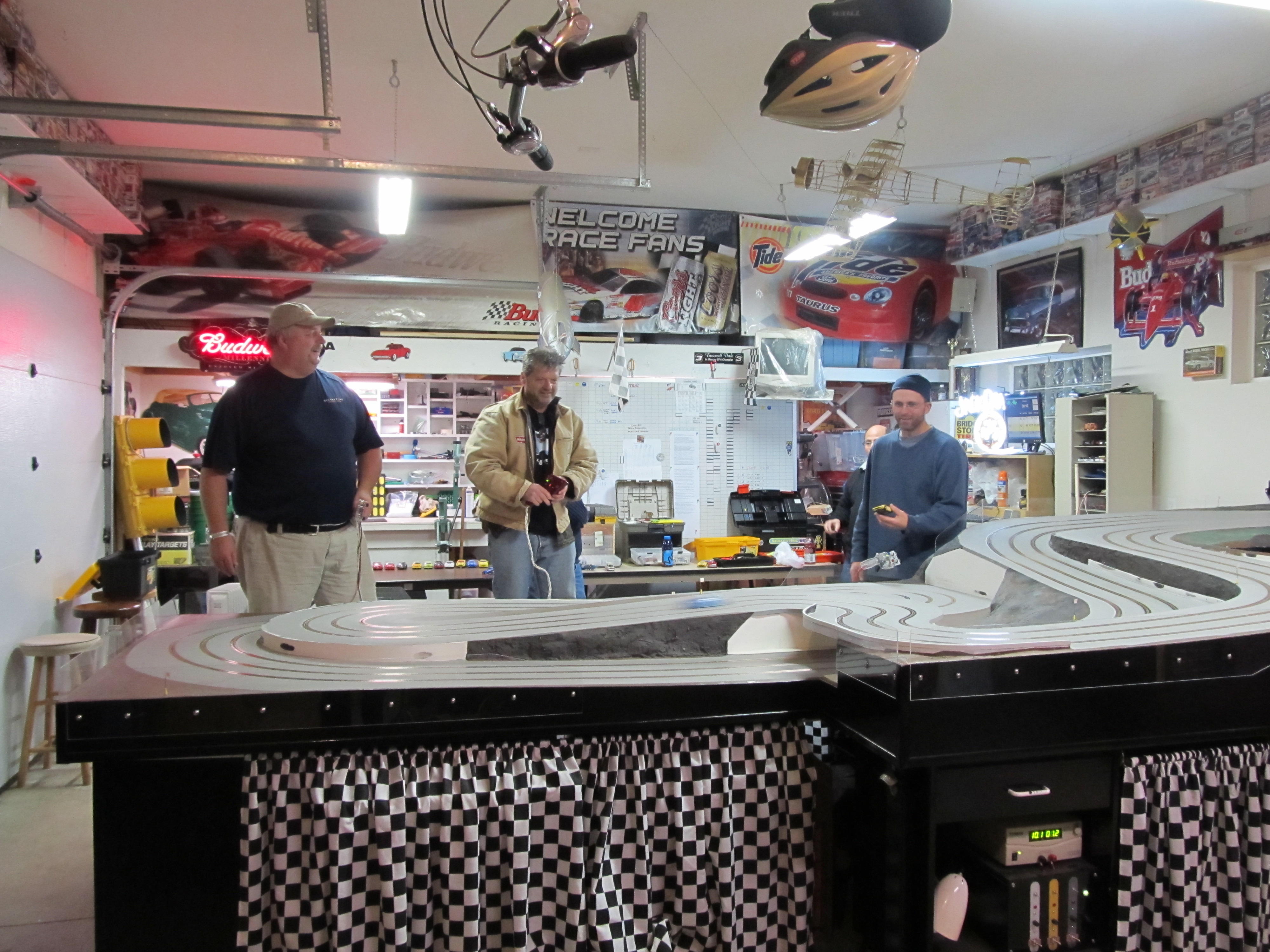 Here's the results From the standard Odd Thursday Classes: 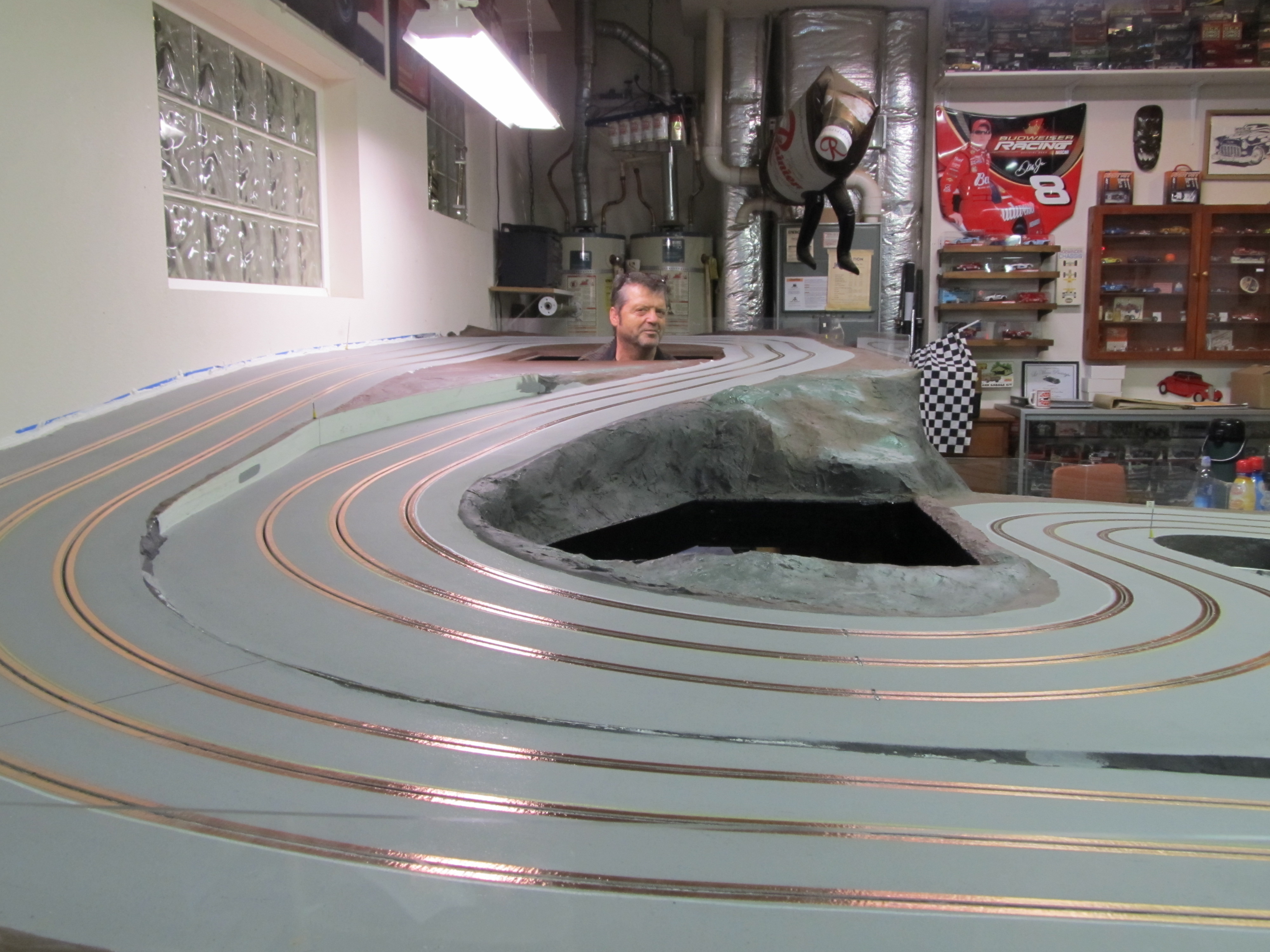 Thanks Bill for another fun night of racing, I really enjoyed myself. Also, thank you to those who brought snacks, much appreciated.

Thank s Rico, it was a fun night!

MAN, was it cold last night!...Outside, but in the garage it warmed up nicely with the twelve 98 degree heaters (racers) in attendance. We welcomed two newcomers, Rob Enders, and Doug Truesdail, and our friend Ruben DeGuzman dropped in from Canada. There was some very close racing and some well placed nerfs. Chris Kouba has a killer car for the Classic Sports Car Class (Flyin' Bryan - the challenge has been put forth). Chris just edged out Rico for the win in the Classic Sports Car Class. The finish in the GT Class was just as close. It sounded like everyone was having a good time! The results are listed below: