The prototypes were excellent at the 24h last year.  I expect the same of the production versions.

If the interest is there, I will craft a set of rules in the same spirit of the other classes (box stock) and we will get these cars into the rotation.

I hope a new class would include the original versions.  Having two already i'm not excited to buy another one.  They do look nice though.

Wow, that first Camaro already has the wheels done.

Fear not Monte, the prototype versions can play with the new ones. If there is any perceived advantage, that's a bridge we can jump off of later.

Is it everyone's opinion that these will be what we race in Tacoma? Or do you suppose the cars will be Revo Slots?

So this sounds like it rules out the new TransAm cars since they are production units.

I don't need another slot car but... That seems to be turning into a mantra... but I'm very fond of those Camaros.

Those who may already have obtained other BRM 1/24 Trans-Am cars may notice
mine sits lower. Tweaked the chassis, fixed a longer guide tongue with a JK guide
flag, removed a few thousandths off the front tires, replaced the 3 mm rear axle
assembly with a 1/8" axle housing to match all my other cars and exchanged the
hard rubber tires with large diameter Pro-Tracks. Shaved shorter the four mounting
posts so the car sits lower on the chassis.Chassis/track clearance is .55" front, .60"
rear. Some lead weight here and there. Added a little more detail to the driver figure. 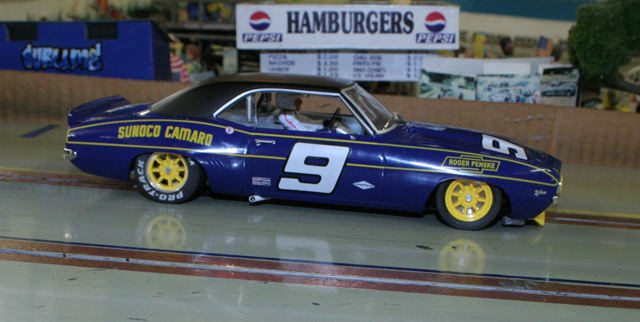 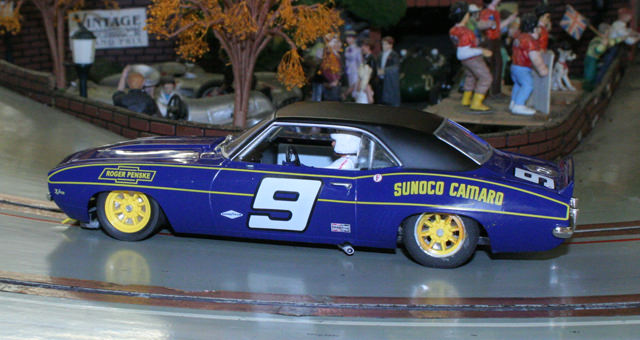 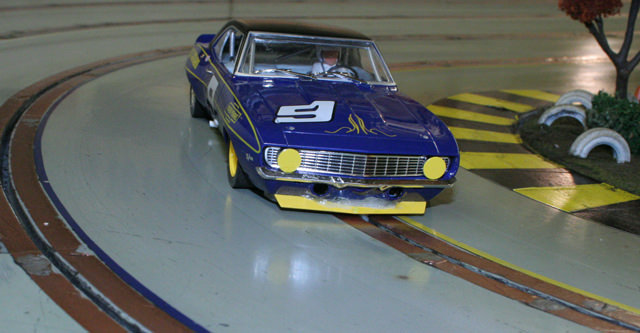 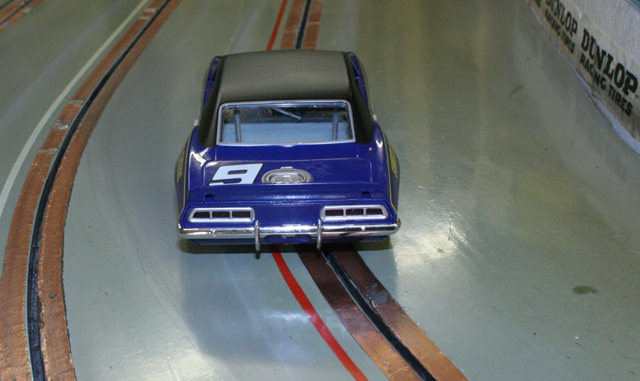 Now have 3 of Penske' iconic s '60's cars. By the way there's a story about the
Camero's vinyl top.

“The 1969 Trans-Am season had all the qualities found in one of Hollywood’s’ epic
Western Movies. There were good guys, bad guys, angry words, an uncaring sheriff,
treachery, cheating, suspense and several good shootouts. SCCA officials were
continuously accused of favoritism in the application of the rather loosely written
rules. Some of the rule infractions that were handled in a rather questionable manner
was the Penske vinyl top controversy”

Chuck Cantwell who was Team Penske’s top Engineer is said to have remarked,
"We acid-dipped our cars to reduce the overall weight. In 1969 we got a bit carried
away and the tops of the Cameros became so thin that they rippled. That’s why
we ran the first couple of races that year with a vinyl top to reinforce the roof.
Had we not done that the tops on the cars would have probably collapsed during
our first race at Michigan.” The book with its many photos contain several showing
the vinyl tops.

Hi Bill, thanks for the compliment. Edited my original posting explaining the top

Thanks for the vinyl top story Todd!

Hope all's well in the Eugene area! Say Hi to all the racers for me!

Todd, how about a picture of the guide flag adjustment?

Now Monte, he replaced the guide flag. I believe our rules say stock parts, however his car looks like a lot of fun to drive.