One of many McFarland Memorial Events will be held at Electron Raceway on 6/6/22. The Event will feature both OSCAR and True Scale Trans-Am cars running together in a mixed race. The event will be an informal and lighthearted affair celebrating the life of Slot Car builder and racing legend, Bob McFarland. If you are not local and are thinking about attending, please contact Rich via email (vecchio.richard@gmail.com)
Race information is as follows:
• Either OSCAR Trans-Am or True Scale Trans-Am cars are eligible to compete
• Doors open at 3 P.M. on race day for practice
• Snacks and Iced Tea will be provided
• Bring your own food and/or snacks. A refrigerator will be available for storage
• Racing will begin promptly at 7 P.M.
• No qualifying or tech inspection.
• Race Director will seed participants.
• Race Format will be 2 times through with 2 minute heats (may be adjusted based upon number of attendees).
• Race will be stopped to allow a competitor to address a mechanical or other problem without penalty.
• Race Director will allow competitors ample time between heats

Ten racers made it out for the Monday evening event. Seven local racers and three out-of-towners. Rich's beautiful track is tricky and challenging, especially for the out-of-towners (who came to be known as The Three Garys; Gary T., Scarey Gary, and The Turd Gary. I suppose you can guess who the Turd was....).

In addition to Rich being entered in the race, Bob Hanna was in attendance, which meant there were some seriously fast racers on hand! Rich allowed both the usual for Roseburg racing, big wheel style Trans Am cars as well as the OSCAR spec Trans Am cars to compete. The cars entered to race were beautiful to look at! All of them were very nicely painted and detailed! Once the racing began it was clear that Bob Hanna and Rich were the guys to beat! I couldn't believe how quickly they could get around that technical course! In the end it was Bob Hanna victorious over Rich Vecchio. Following those two were Ron Leuenberger, Lowell Buehner, and Mark Colby. The top five finishers received some very cool awards hand made by Rich.

In addition to the standard style of distance over time racing, Rich has a computer program he uses to determine finish positions by handicap. So at the completion of the race, some of us less skilled racers have a chance to finish a little higher in the secondary results, based on our actual performance average over our "handicap". It's an interesting system, and well to be honest, it worked out well for me! Thank you for hosting a great race Rich, and another tribute to Bob McFarland! 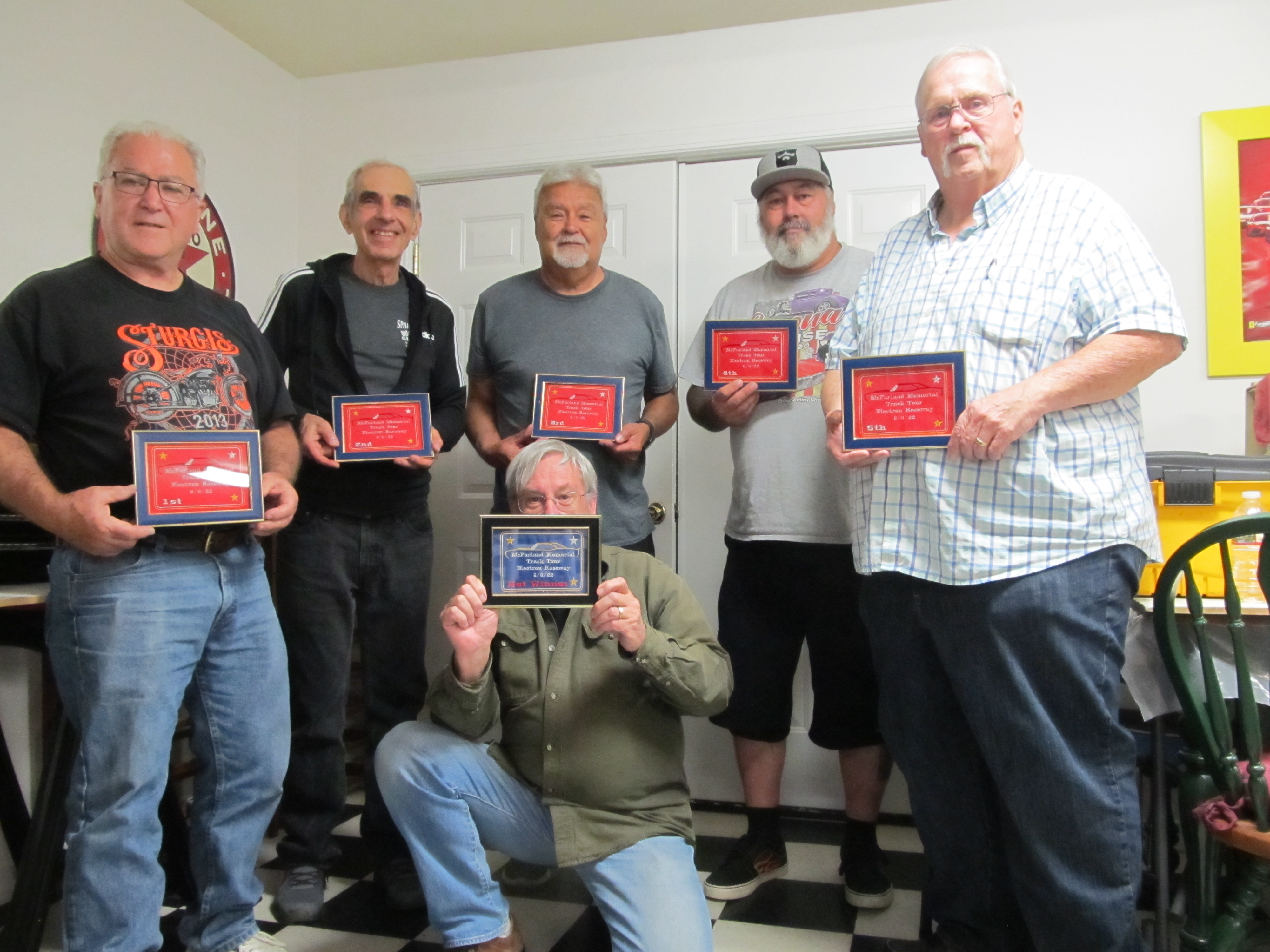 Bill,
Thanks for organizing the McFarland Memorial Track tour and thanks for the write-up.  It was really interesting to see that the H-Bracket (Big Wheel) cars were more than competitive with the OSCAR rides.  Note that the top four finishers entered Big Wheel Cars.  I know the comparison was not perfect because many of the OSCAR racers were not locals with track knowledge. 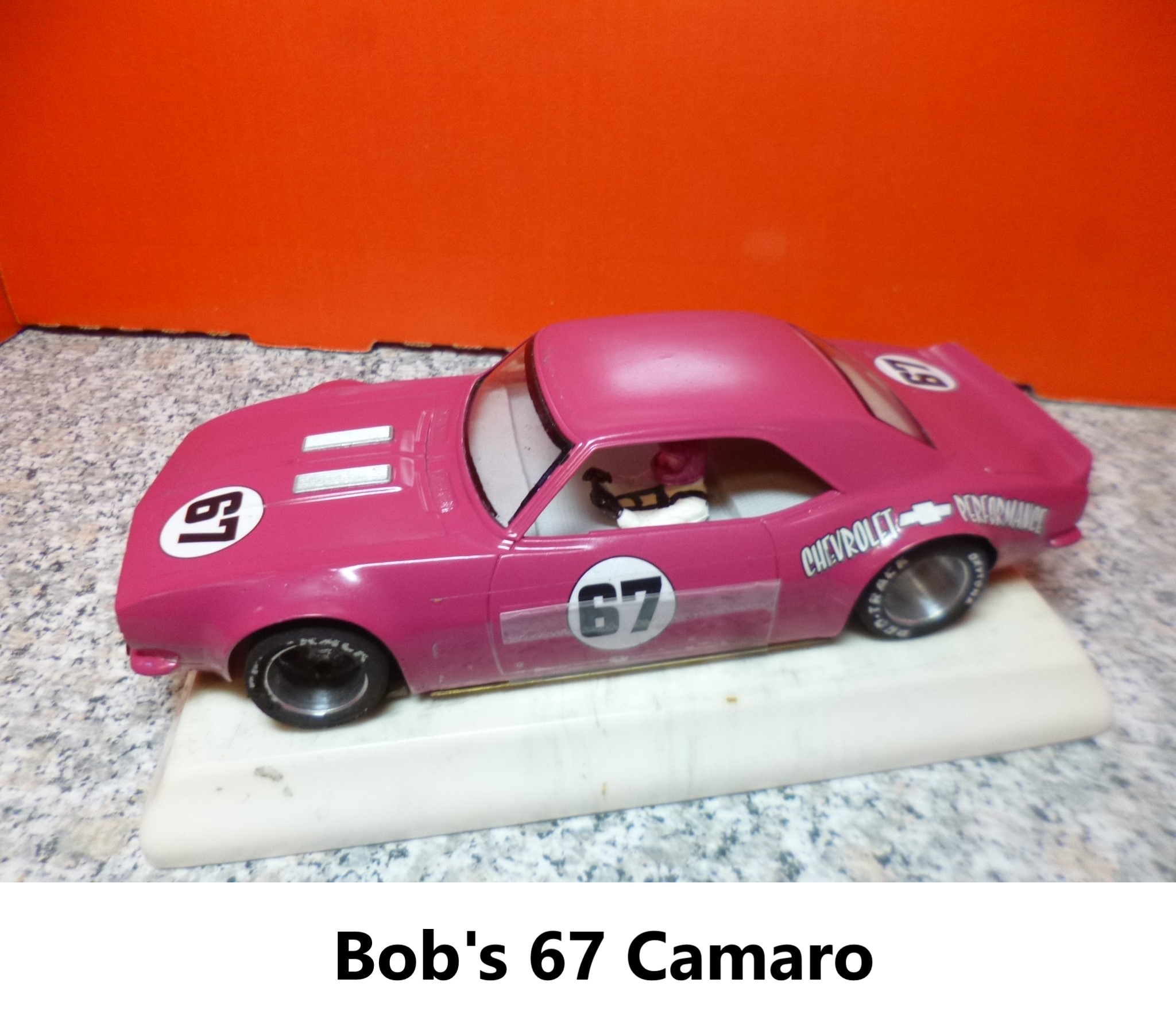 You're welcome, it was a lot of fun and I really enjoyed racing with the Electron guys!