My wife has been saving her Barbies and Troll Dolls for our nonexistent "grandchildren" for 20 years. They are in boxes in the giant shipping container we've purchased to store all the stuff that was in the shop while we prepare for the renovation. My gut has always said that "if you haven't opened the box for more than 2 years you can throw it all away," but that somehow doesn't seem to make any difference to SWMBO.

She Who Must Be Obeyed. The Better Half. The Ball & Chain. My Beautiful, Loving Wife, the Light Of My Life.

Have you ever started a project and about half way through wished you hadn't started in the first place?

Today I started sorting through some of the slot car related tools I have run across. I had a pretty good assortment of tools that got boxed up for our move here to Vancouver. I have finally found some of those boxes and have added to the stack with tools I got from Goose's stuff. So, if you have tools you want or tools you are looking for send me your list and I'll help you fill what I can. I have extras of most all hand tools used in the slot car hobby! I also have some very cool old vintage wheel wrenches (for nuts on threaded axles) with the old school logos on them (i.e. Cox, K&B etc.).

Have you got a nibbler for cutting brass sheet?

I do have one Stan, but it was mine before I got Goose's stuff. Goose did not have one, or I haven't found it yet, so i don't have an extra. Sorry.

How about some tech tools?

What type of tech tools are you looking for?

Stan,
I bought a nibbler that attaches to a drill motor, it was only about $12 on eBay, they seem to be readily available.

My nibbler is a hand tool similar to the one in Zack's video. Although mine is much older I'm sure. Hell, Zack may not have even been born when I bought mine!

Mitch, I've been curious about those drill attachments. How well do they work, and can they cut tight curves?

Do you have an extra pinion press?

The nibblers I have seen for the dill are usually a round profile. I have a hell of a time cutting anything close to straight with them.

I have a pneumatic one at work as well and its the same for me...

Zack - What tech tools are you looking for? I have some of the tech inspection tools they use for Flexi racing.

With Coronavirus still in play I've been going through boxes in the shop. Boxes still unpacked from my move two years ago as well as boxes of Goose's stuff from his estate. As I empty the boxes I do my best to find a place for everything and get it all put away. Here's an updated photo of my display case: 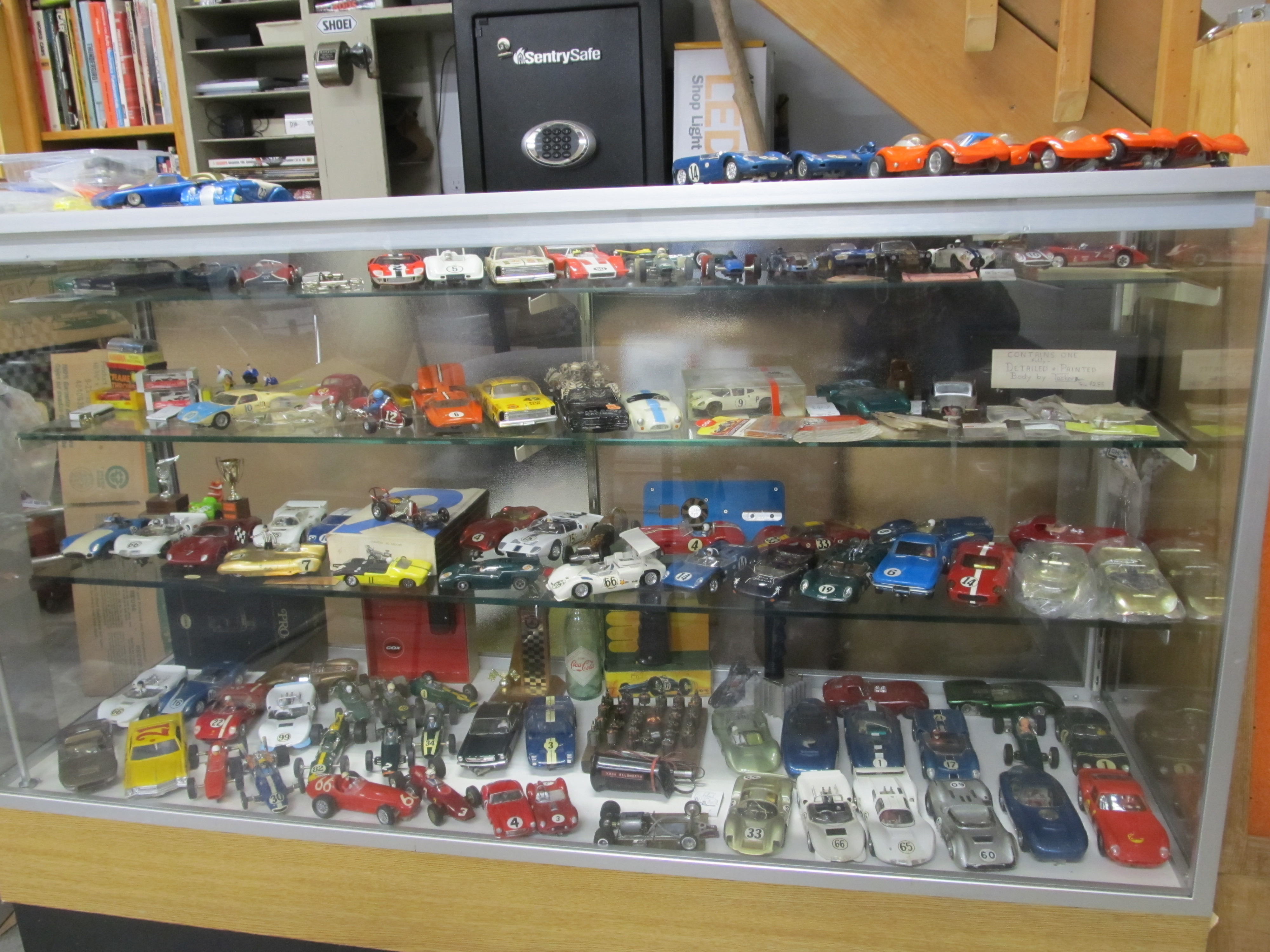 I've been asked many times; "just how many slot car boxes do you have?" Well, I'm not really sure, but here's twelve of them:

The box to the right of this opened one with cars in it belonged to Jerry Gaston. I acquired Norton Gaston's collection of cars he and his father Jerry had raced in the 1960's in Southern California. The cars in this box are a mixed assortment of cars I've picked up over the years and a few that were Goose's. 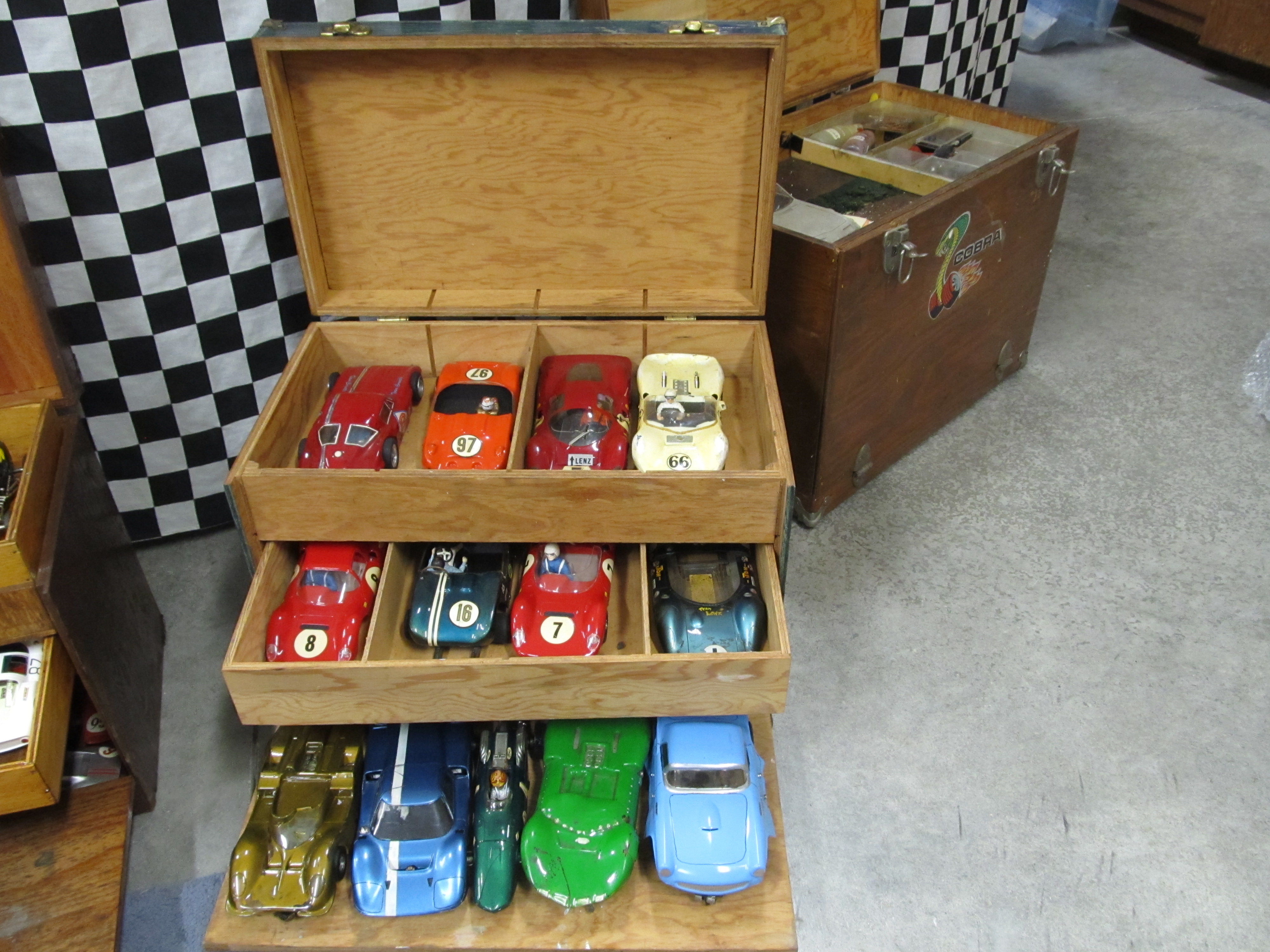 Some later model 1/32 cars as well as some vintage cars. 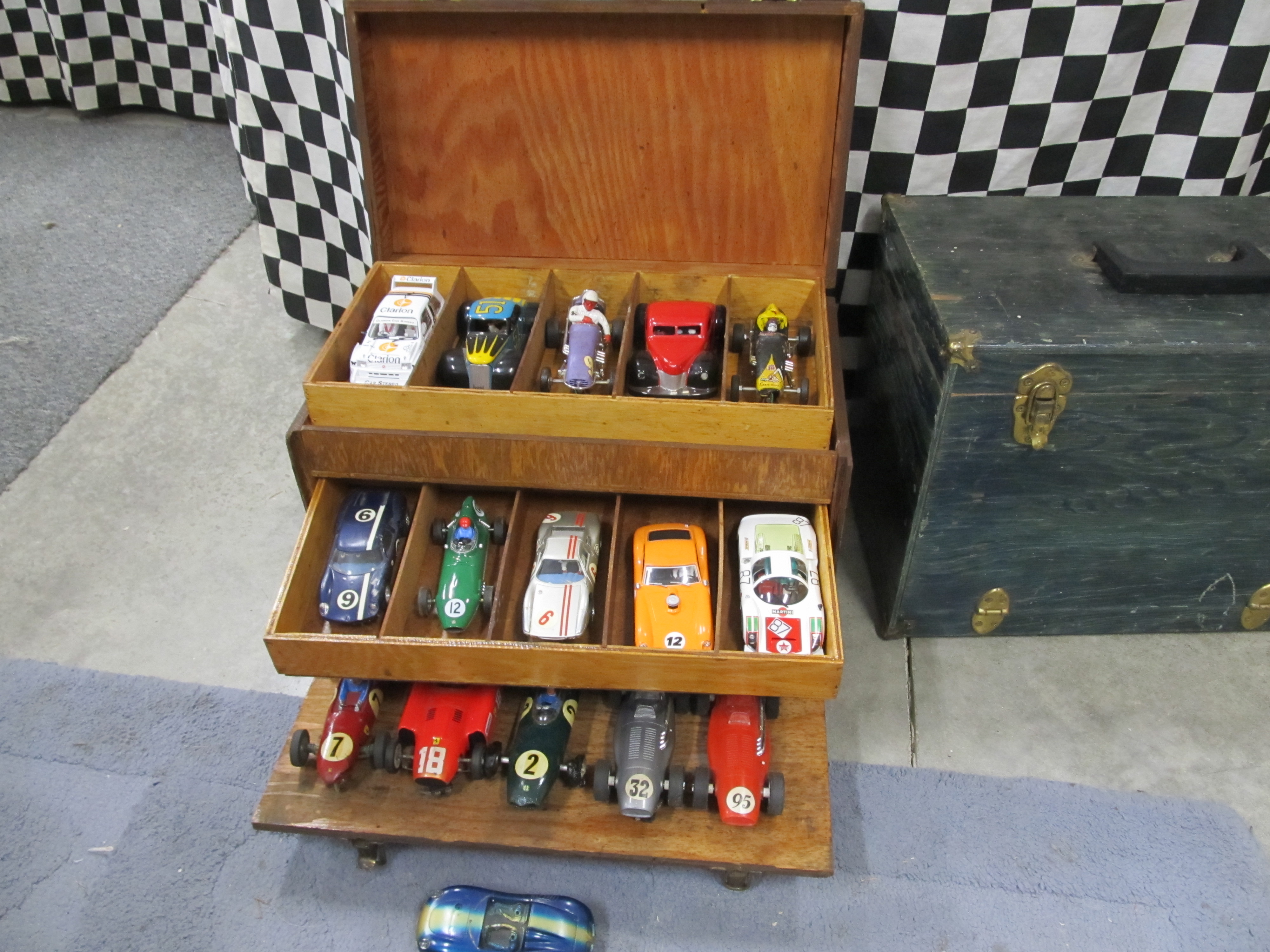 I've had this box for many years. It now houses some flexi type cars for use on Inslot's Checkered Flag Raceway. The Flexi type cars make great loaner cars for new racers and neighbors! 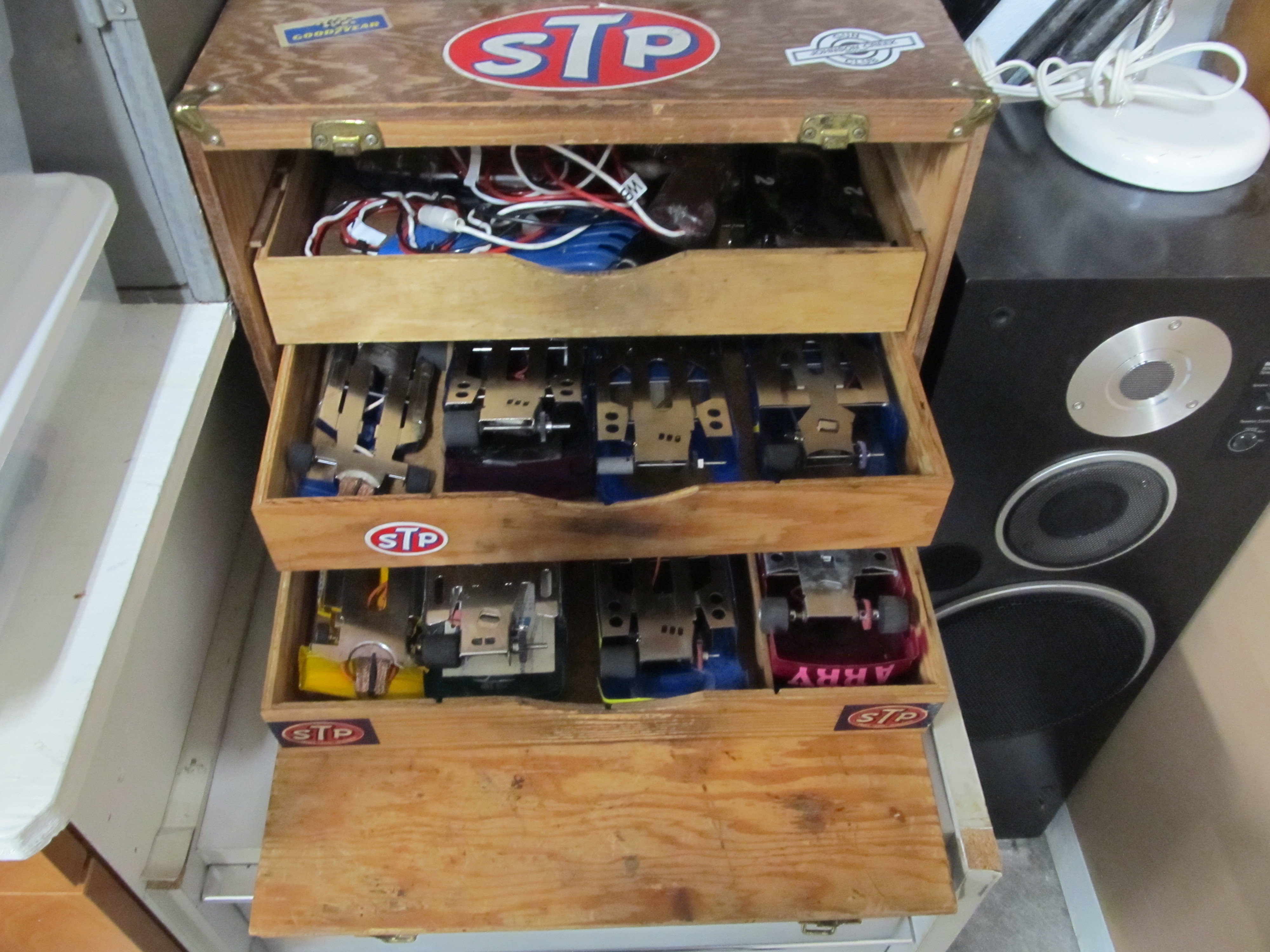 I've got a little room left in this slot car box which is good because I still have many packed boxes to sort through. 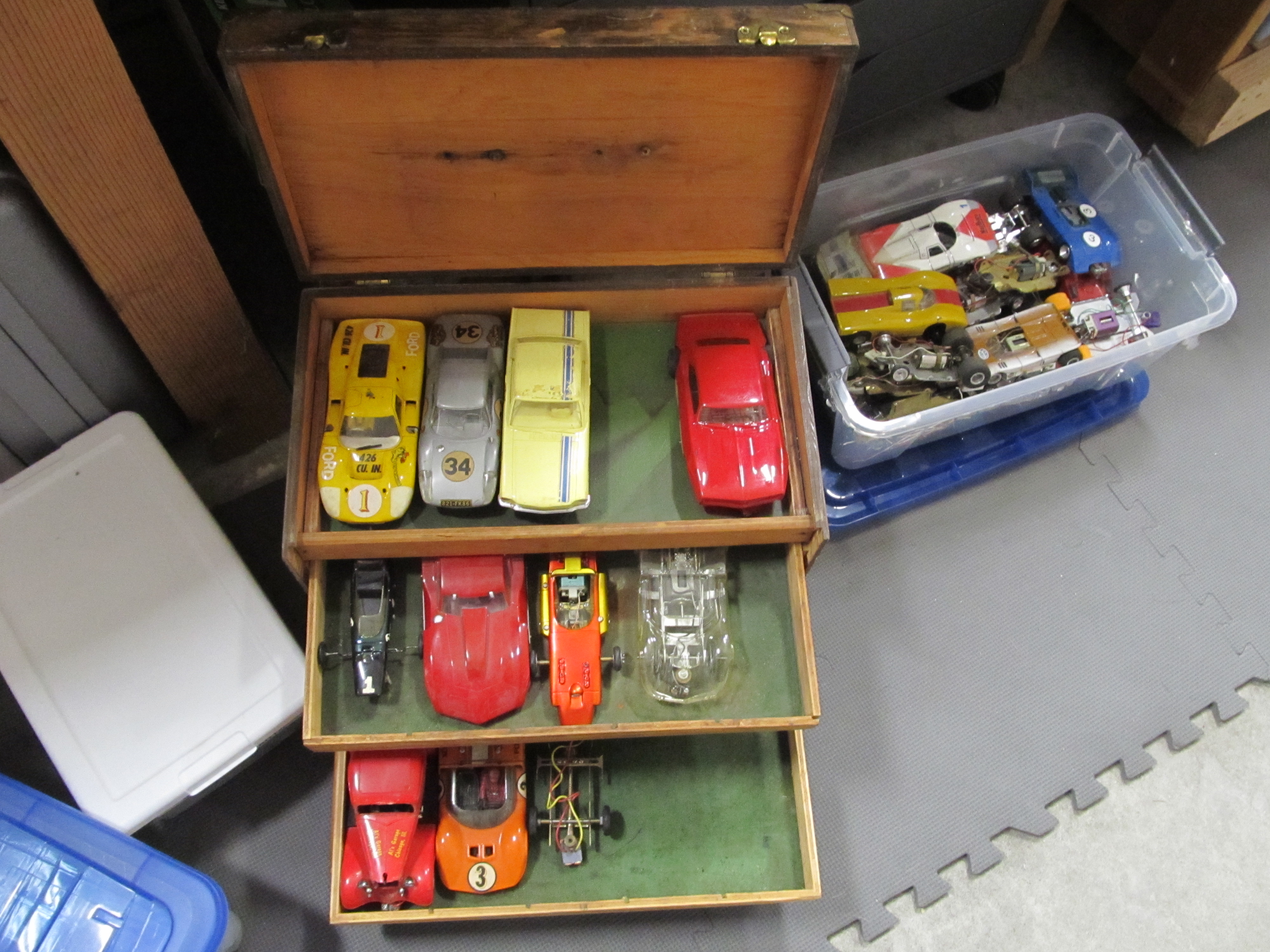 No this does not count as a slot car box! This is the Womp bucket, cars and parts to be soon resurrected for use at Inslot's Checkered Flag Raceway! 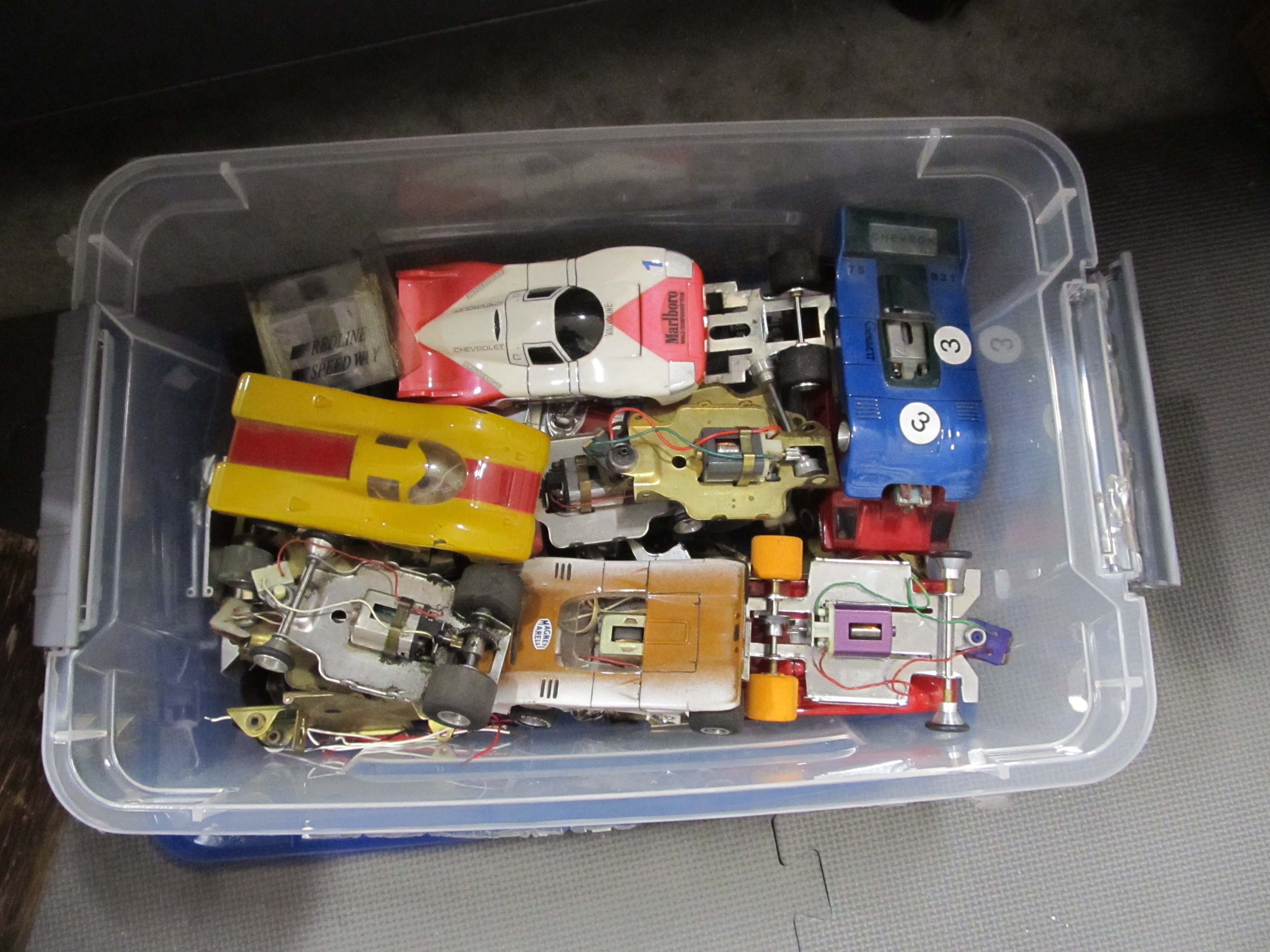 I'm not sure where exactly I picked this box up, but it works well for my NASTE Odd Thursday Night 1/32 race box. 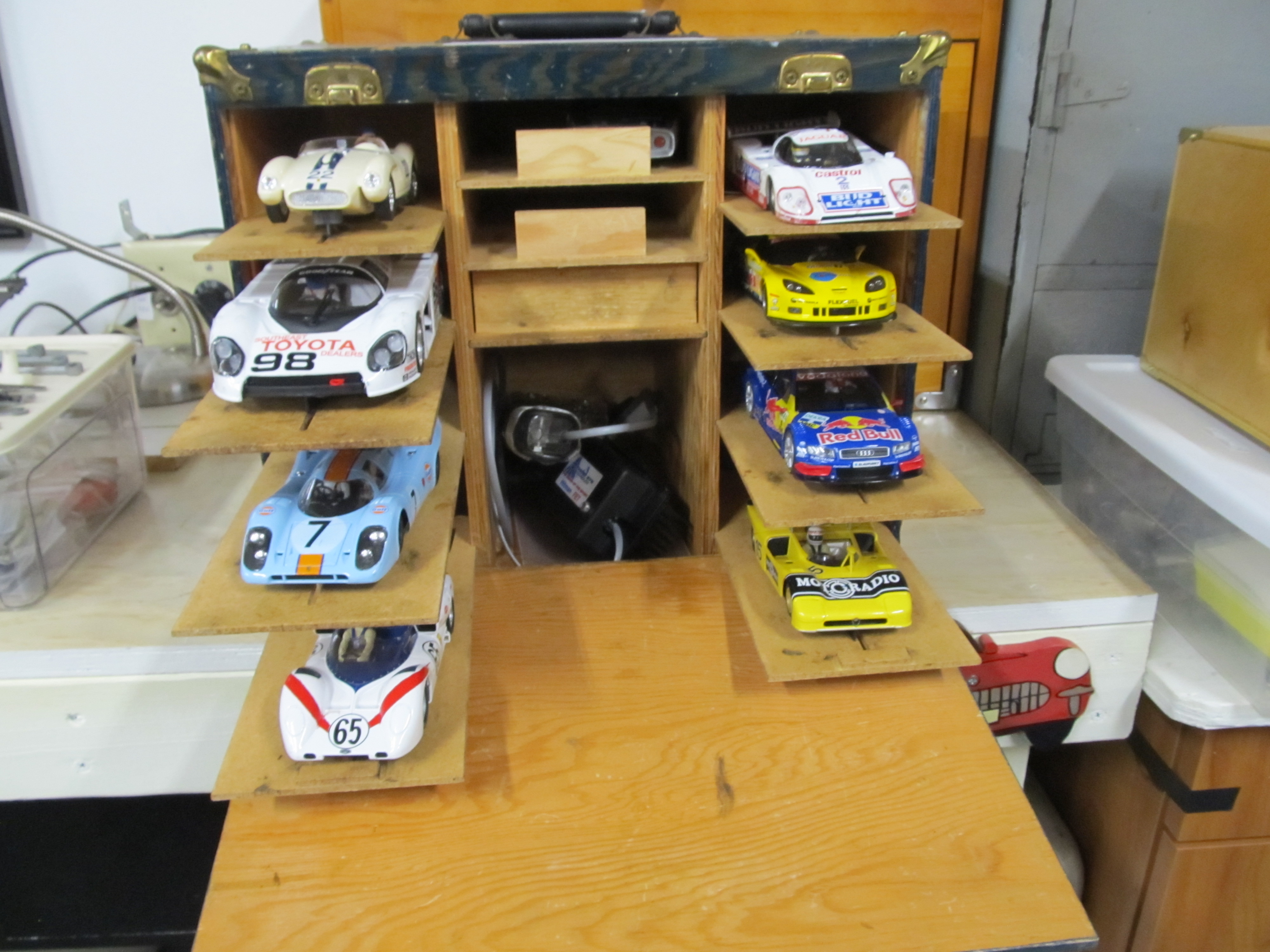 This is another box I have had for many years. I used it in the early 80's as my race box for racing in Wilsonville with the PASER club. It got a little refinish work a few years ago and I added the vintage slot car magazine ads. 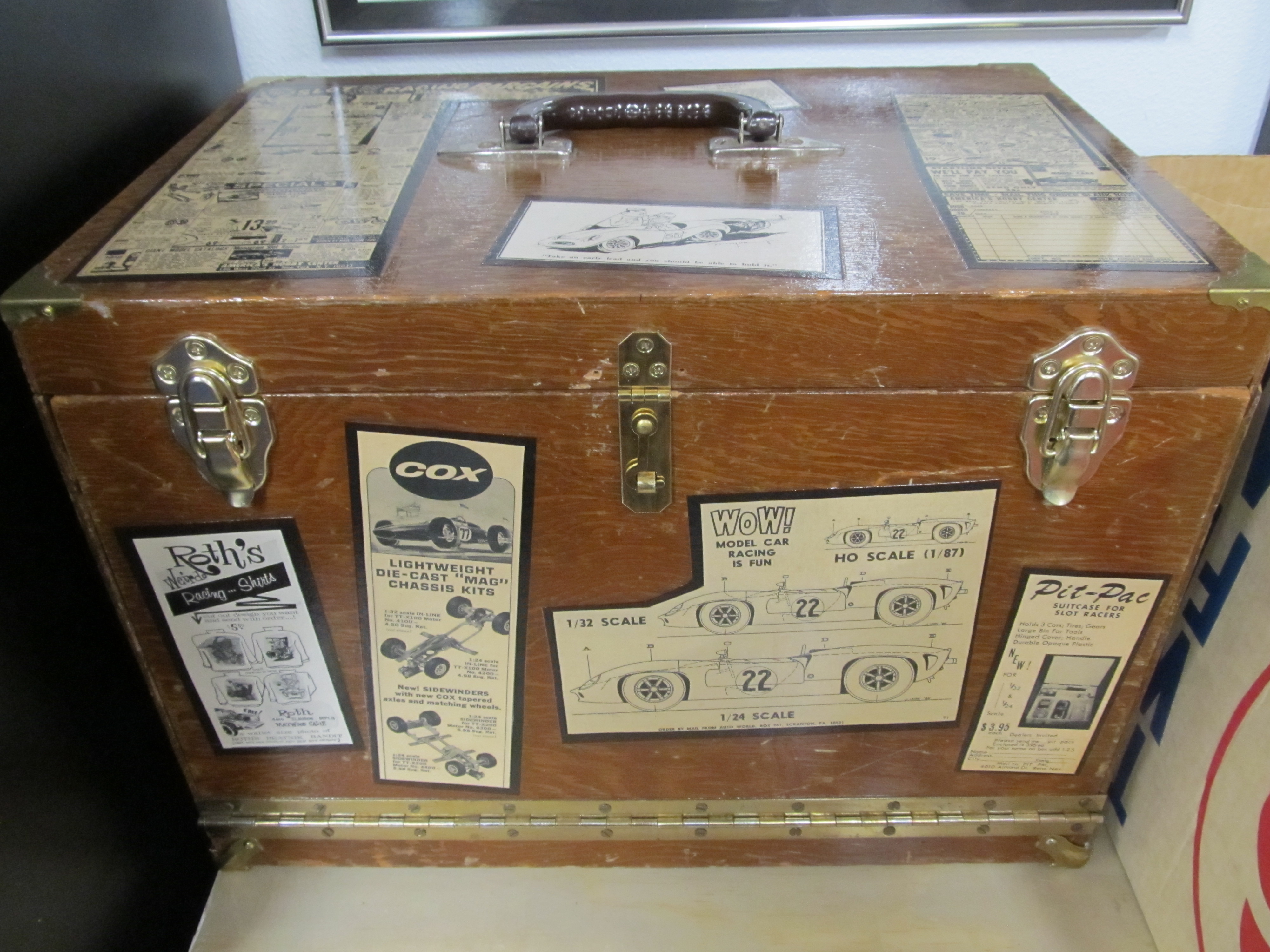 This box is very near and dear to me. I owned a 1965 Corvette Stingray convertible when Rico's son AJ hand painted this box for me. He is an outstanding artist. This box has a special place trackside at Inslot's Checkered Flag Raceway! 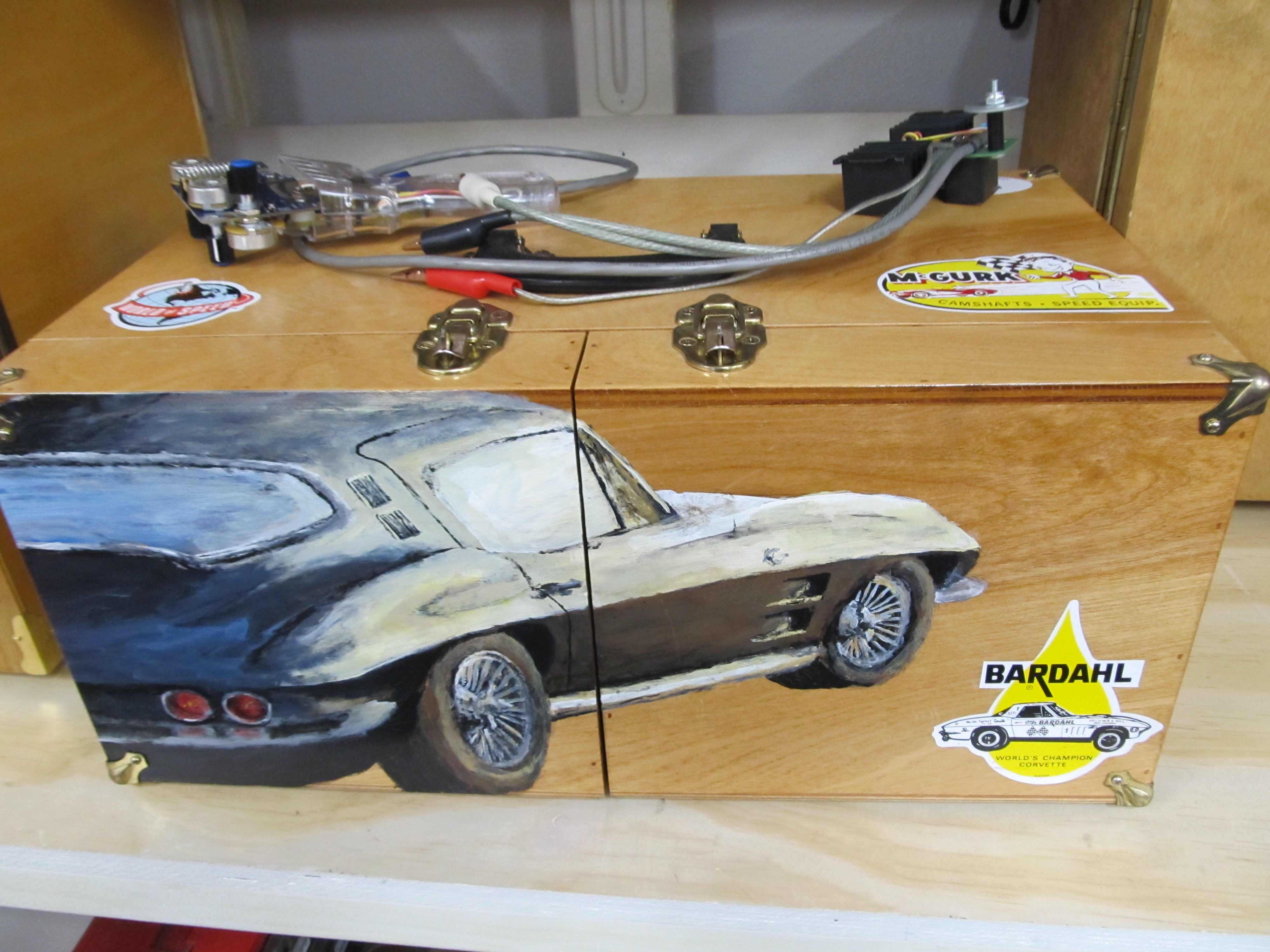 This is my newest "new" box. Zack set me up with his buddy that built this box for me. He did an outstanding job on this box and it is also one of my favorites, earning a special spot next to the track. 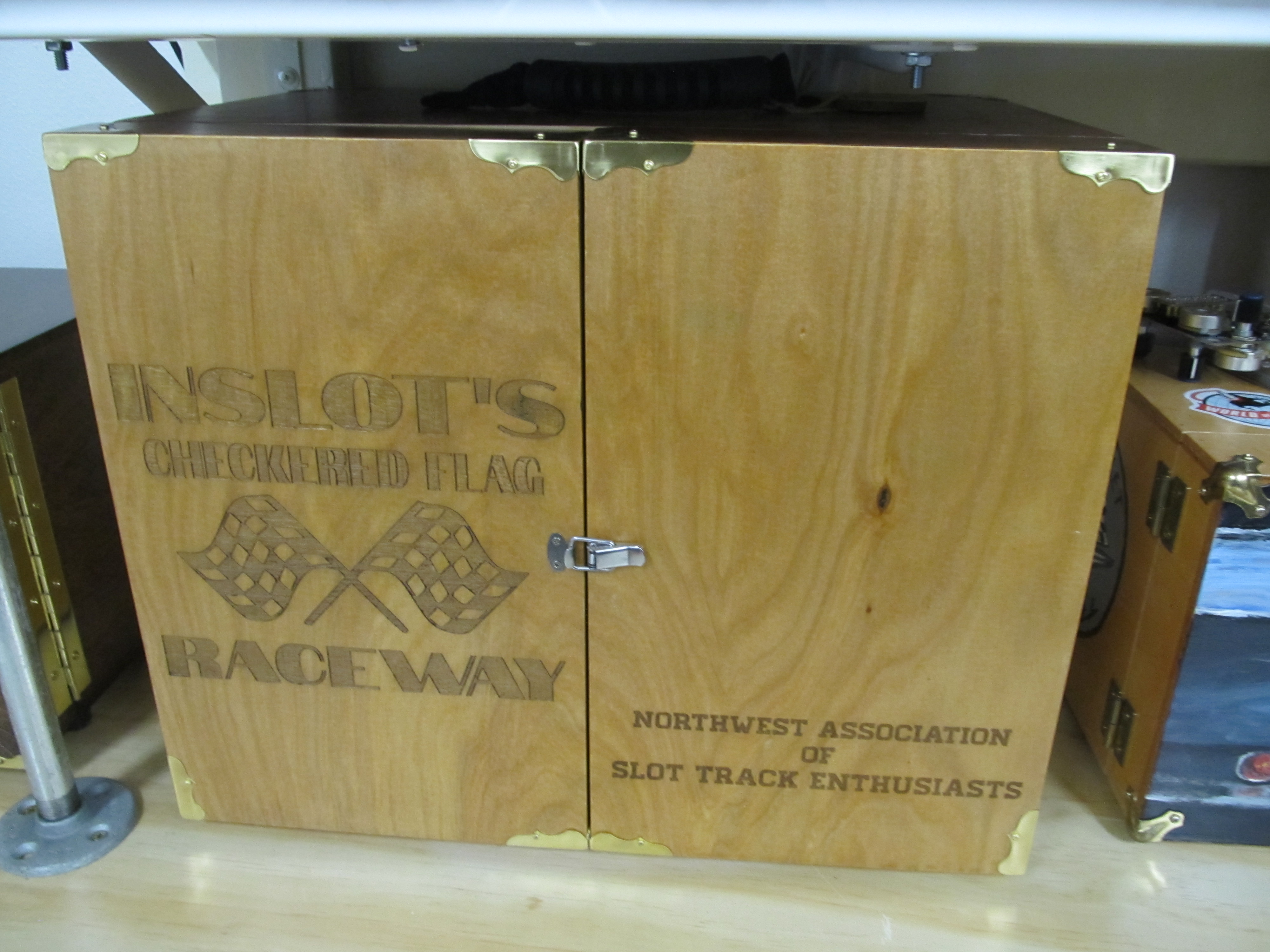 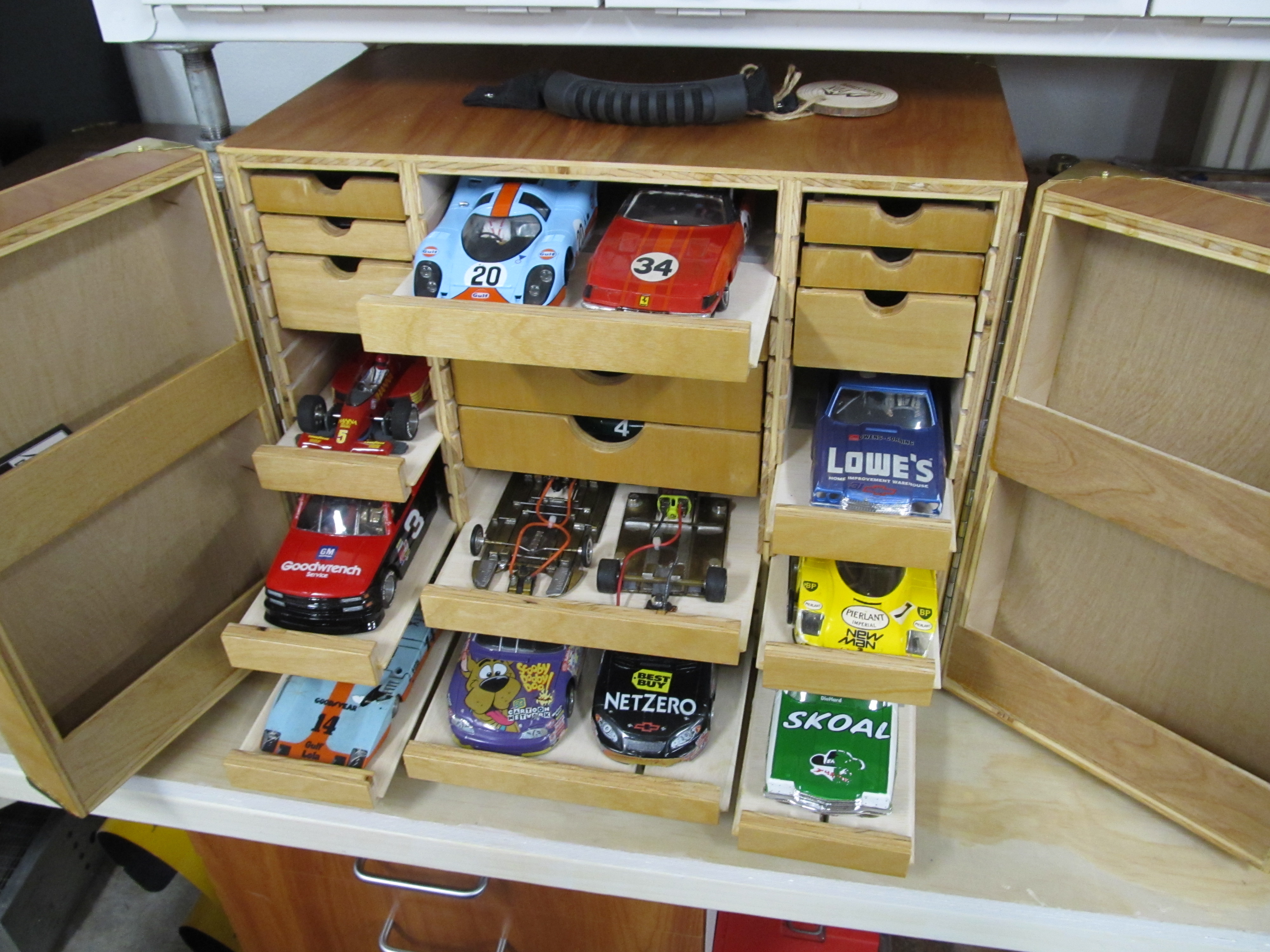 This was a box Goose had. I gave his son the box Goose used to pack to the races. I think he probably used this one for his RC car racing and stuff. 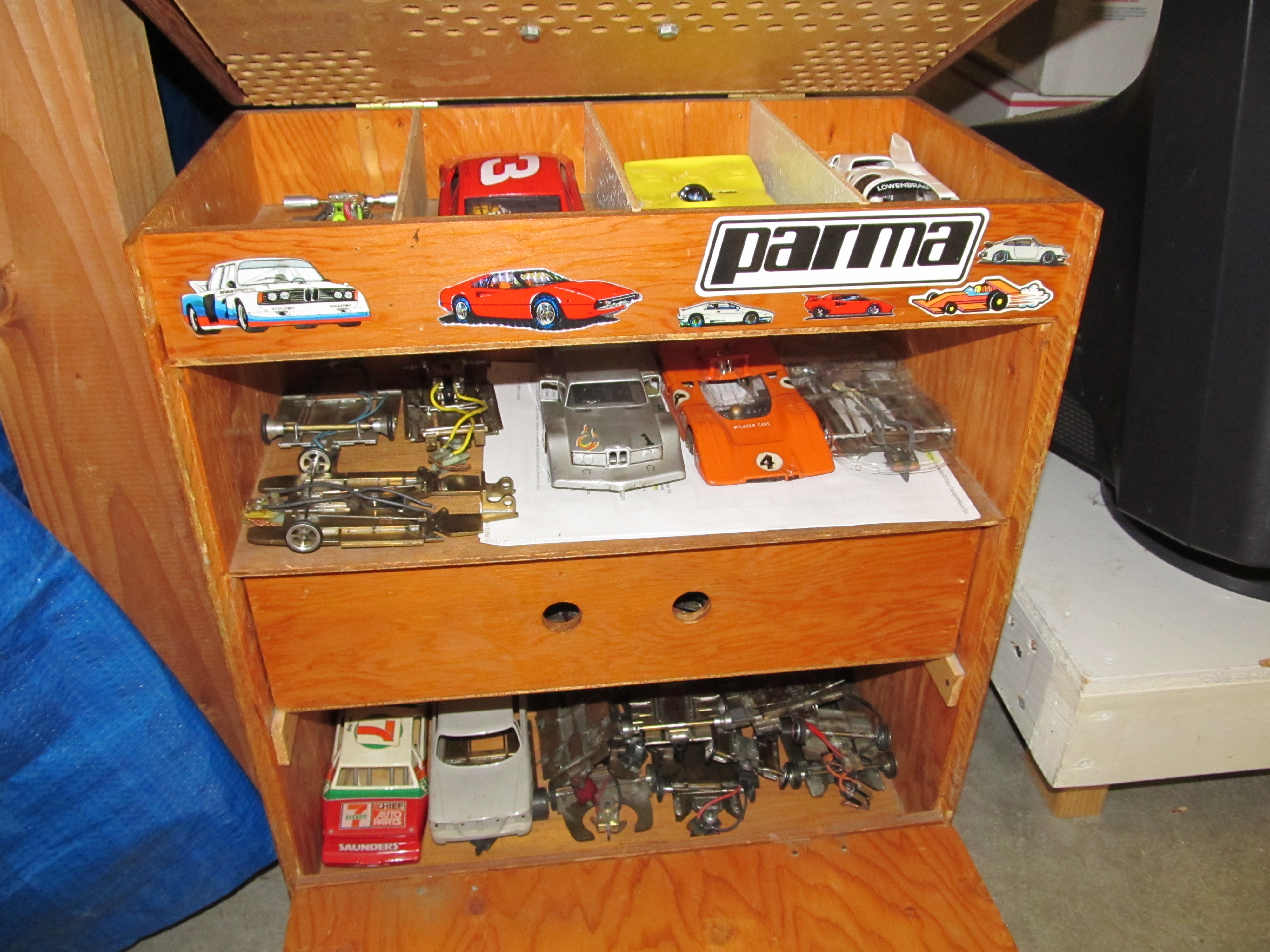 This box was an Ebay win, but it needs some repair work as it was damaged in shipping. 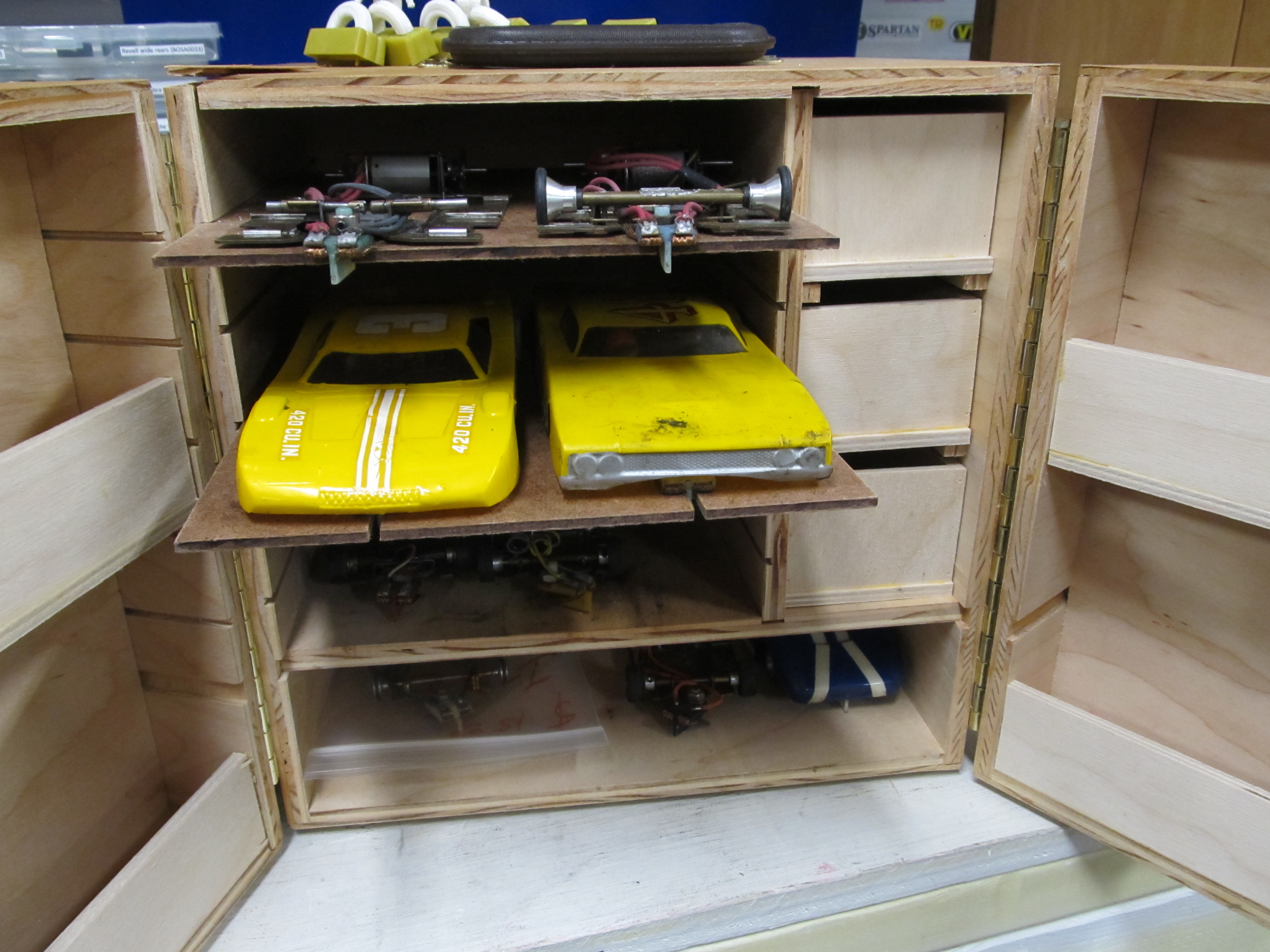 This box I bought from Terry Abbott. It is unique in style and holds a lot! 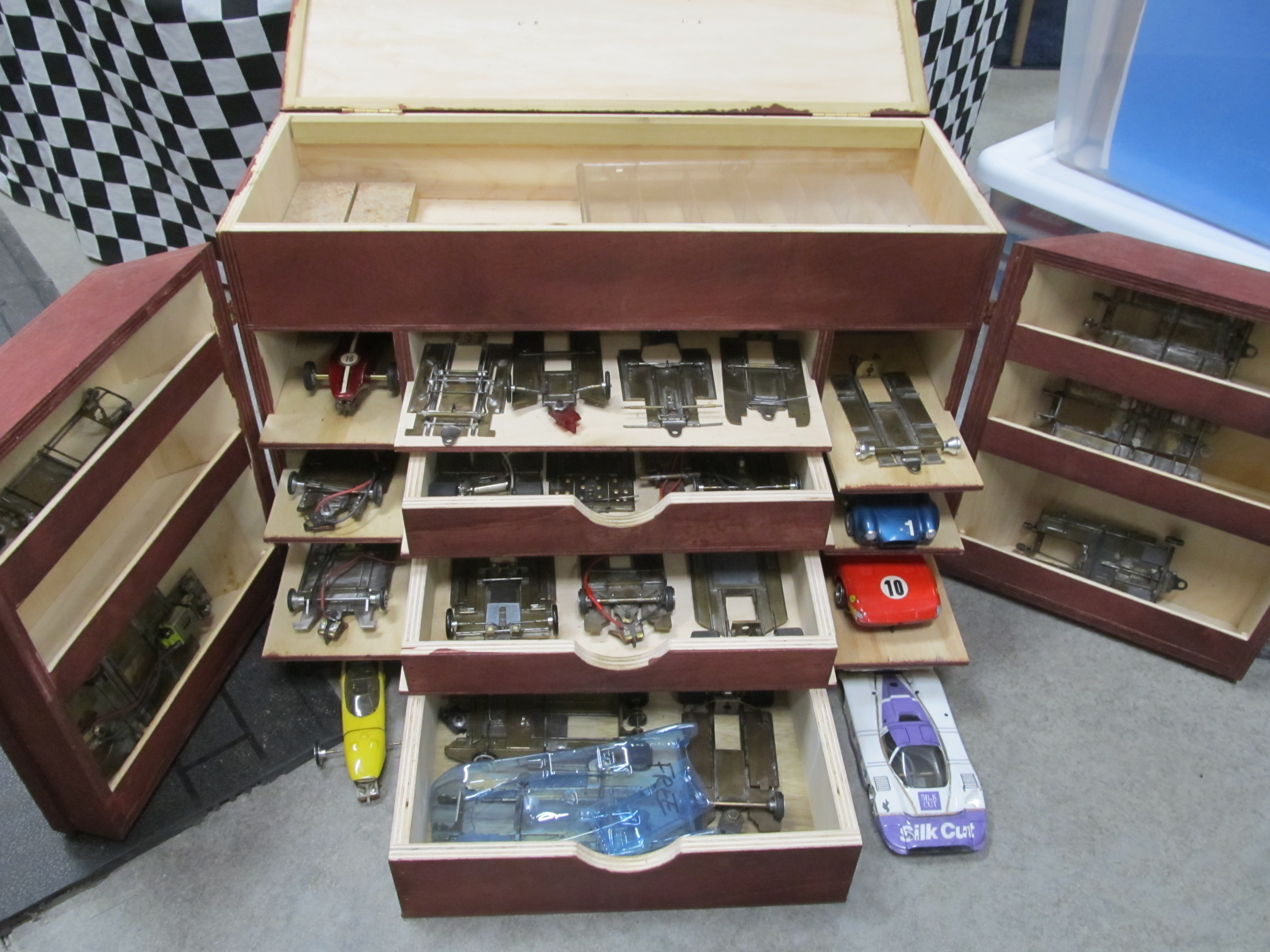 Geeze you need a forklift for some of those!

Not much to say Bill, except you are surely keeping the #1 spot as the "Slot Car Slut!

I'm impressed with your collection of boxes and memorabilia cars there Bill. A few years ago, I bought a Cox La Cucaracha 1/24 scale car in mint condition from Ebay. Thought i would keep it forever but after 6 months or so I lost the urge to own it ... so it's gone now. I guess I have adopted the attitude ... if it doesn't help my race program,  I don't need it.